A lot of work went into this report — I wish I knew that more Americans would learn about it and the many examples of waste found in it. Here is what’s printed on the cover:

Here is just one of the 100 items highlighted — it’s third on the list:

Unless you are into extreme tourism, chances are you did not choose Lebanon as the destination of your family’s summer vacation this year.

The U.S. State Department issued a travel warning in May urging Americans “to avoid all travel to Lebanon because of ongoing safety and security concerns.” U.S. citizens have been killed in bombings and kidnapped within the Middle Eastern nation in recent years. Islamic State of Iraq and the Levant (ISIL or ISIS) terrorists have staged attacks along the nation’s eastern border with Syria and there are tensions along its southern border with Israel as well. “Sudden outbreaks of violence can occur at any time in Lebanon,” including attacks by suicide bombers, according to the State Department. Islamic State sleeper cells are also believed to be hidden within Lebanon. 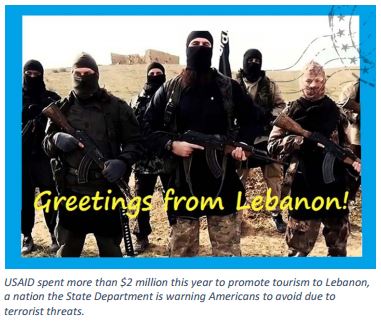 Despite these risks to U.S. citizens, the United States Agency for International Development (USAID) spent more than $2 million this year to promote tourism to Lebanon.