Editor’s note: This pro-life event kicks off in Aurora, Illinois this Saturday.

Forty-three years ago the Warren Burger Supreme Court struck a mighty blow for the powers of darkness: in a 7-2 decision the justices ruled in Roe v. Wade:

The right to privacy was broad enough to ‘encompass a woman’s decision whether or not to terminate her pregnancy.’

And with that one awful decision, the Supreme Court of the United States (SCOTUS) declared Jane Roe (Norma McCorvey) the victor. Norma, a pawn of feminist activists, would later see the horror of Roe v. Wade, and with her decision to follow Jesus, picked up the gauntlet to fight for the unborn.

Over 57 million innocents have been sacrificed on the altar of convenience and the “right to privacy” since Roe was wrongly decided.

But today there’s a righteous spirit, gripping women, young and old across America, compelling more and more victims of the abortion deception to come out of the shadows, tell the truth, and reinvigorate a love and sanctity of life in our nation.

Ricki Giersch is one such woman and story. In a desperate place — 16 and pregnant — Ricki turned to a Champaign, Illinois Planned Parenthood to solve her dilemma. And as a junior in college, with a repeat crisis pregnancy, Planned Parenthood stalled her abortion until she had the extra $100 needed: it was all about the money, not about Ricki’s wellbeing or that of her unborn baby.

At age 32 Giersch made a decision to follow Jesus, whose truth began to illuminate the evil of abortion, and whose grace and love began to heal her broken spirit and heart, the consequences post-abortive women bear.

Now, years later, Ricki Giersch and Catherine Walker co-lead 40 Days for Lifein Aurora, Illinois along with team members Katherine Woltering, Sabina Dahl and Jenine Mehr. They are resolutely committed to this effort to overcome the darkness ushered in by the nefarious Roe v. Wade decision. These women understand this is a spiritual battle against principalities and powers, and that the solution, the weapons necessary to defeat this evil, must be spiritual as well.

40 Days for Life, “The beginning of the end of abortion,” is:

A community-based campaign that takes a determined, peaceful approach to showing local communities the consequences of abortion in their own neighborhoods, for their own friends and families. It puts into action a desire to cooperate with God in the carrying out of His plan for the end of abortion. It draws attention to the evil of abortion through the use of a three-point program:

The 40-day campaign tracks Biblical history, where God used 40-day periods to transform individuals, communities … and the entire world. From Noah in the flood to Moses on the mountain to the disciples after Christ’s resurrection, it is clear that God sees the transformative value of His people accepting and meeting a 40-day challenge.

The mission of the campaign is to bring together the body of Christ in a spirit of unity during a focused 40-day campaign of prayer, fasting, and peaceful activism, with the purpose of repentance, to seek God’s favor to turn hearts and minds from a culture of death to a culture of life, thus bringing an end to abortion. 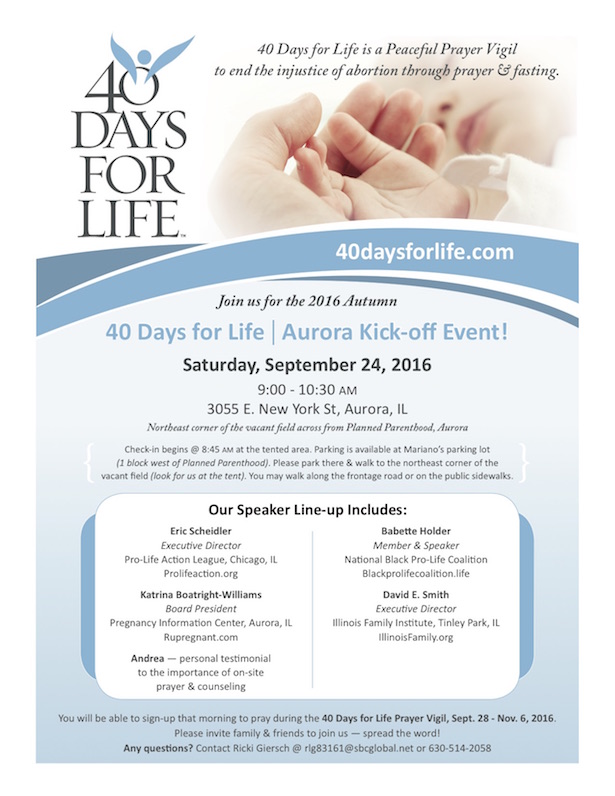