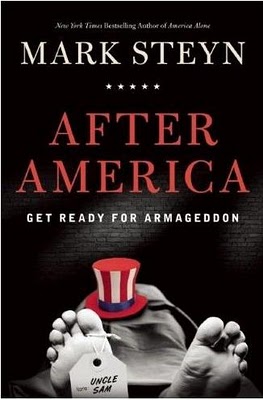 “After America” is all that and more.

Here was my next paragraph:

America Alone has the potential to rival Thomas Paine’s works “Common Sense” and “The American Crisis” in historical value. That’s a big statement, I know. I say it because the message the book contains — that current demographic reality and a weak will is a deadly combination — should be what we hear from our political leaders. Too bad most of them listen to themselves and political consulting hacks instead of serious thinkers and professional communicators.

Whoever manages Steyn’s website liked it and pulled the Tom Paine reference and quoted me. And yes, as you can see from the above paragraph, I was well into writing about GOP communications failures even back then.

As I approached Steyn’s new book (again, many months after it was published) I assumed there was no way he could match the old. I was wrong. “America Alone” is even better.

Early on in “After America” Mark Steyn used two quick sentences to sum up his last book and introduce his new:

[In America Alone] I wrote that Europe was facing a largely self-inflicted perfect storm that threatened the very existence of some of the oldest nation-states in the world. My warning proved so influential that America decided to sign up for the same program but supersized.

“It starts with the money,” Steyn writes. The United States has “spent too much of tomorrow today — to the point where we’ve run out of tomorrow; fiscally, our days are numbed…” Everyone understands that except delusional Obama supporters and low-information voters, which are, of course, two ways of describing the same group of people.

Steyn quotes the late historian Samuel Huntington: “A nation is a fragile thing.” More Americans are waking up to that fact every day. They are also waking up to this:

[W]e’re not facing ‘decline.’ We’re already in it. What comes next is the ‘fall’ – fast, sudden, off the cliff, if only because the Obama spending binge made what was vague and distant explicit and immediate.

I love this quote from Steyn:

When government spends on the scale Washington’s got used to, that’s not a spending crisis, it’s a moral one.

Remember the line used against Bill Clinton in the 1992 campaign?: “You can’t be one kind of man and another kind of president.” Well I’ve paraphrased it few different ways — here are just two:

For all those who think we can divorce the social (moral) issues from the argument for limited government, let me quote Mark Steyn: “dream on.”

Steyn writes that ‘fiscal [only] conservatives’ often miss that “this isn’t a green-eye-shade issue”:

Increasing dependency, disincentivizing self-reliance, absolving the citizenry from responsibility for their actions: the multitrillion-dollar debt catastrophe is not the problem but merely the symptom. It’s not just about balancing the books, but about balancing the most basic impulses of society. These are structural and, ultimately, moral questions.

[S]ocial liberalism always ends up burying the fiscal conservatism. As Congressman Mike Pence put it, ‘To those who say we should simply focus on fiscal issues, I say you would not be able to print enough money in a thousand years to pay for the government you would need if the traditional family collapses.’

Those familiar with my writing on the topic of conservatives’ 30+ year failure to communicate will understand why I love this from Steyn:

The United States has not just a ruling class, but a ruling monoculture. Its ‘truth’ and ‘facts’ and ‘science’ permeate not just government but the culture, the media, the institutions in which we educate our children, the language of public discourse, the very societal air we breathe. That’s the problem, and just pulling the lever for a guy with an R after his name every other November isn’t going to fix it. If Hollywood’s liberal, if the newspapers are liberal, if the pop stars are liberal, if the grade schools are liberal, if the very language is liberal to the point where all the nice words have been co-opted as a painless liberal sedative, a Republican legislature isn’t going to be a shining city on a hill so much as one of those atolls in the Maldives being incrementally swallowed by Al Gore’s allegedly rising sea levels.

There so many excellent points made within the pages of “After America” that you’re going to have to buy a copy and read it for yourself. Let me add just two more things.

Steyn refers to the serious problem caused by unionized government bureaucrats, and writes:

[C]onsider two sixtysomething whitebread Wasps living side-by-side in Yonkers, New York: At Number 27 is a lady who retired from teaching in the local school district at the age of fifty-nine and lives on an annual pension of $78,255, exempt from state and local tax, with gold-plated health benefits, and everything inflation-proofed. At Number 29 is a guy exactly the same age who owns a hardware store, can’t afford to retire, has health issues and crummy provision for amelioration thereof, yet will be working till he dies, while his neighbor enjoys a lavish two-decade retirement that he paid for in his taxes. This is a recipe for civil war…

I couldn’t agree more. Too bad the Old Media fails to report this widespread injustice. Public sector employees have been engaged in legalized theft from private sector employees for many years now and it’s only getting worse.

One last excerpt from Steyn’s book. Despite his exposition of the ugly realities of modern-day America, he writes that if we want a happy ending we’re going to have to make our own:

Liberty cannot survive if only a few are eternally vigilant. We need more people. We took our eyes off the colleges, and the high schools, and the grade schools, and these and many other institutions were coopted by forces deeply hostile to the American idea. So push back, beginning in kindergarten. Changing the culture (the schools, the churches, the movies, the TV shows) is more important than changing the politics.

An election is one Tuesday every other November. The culture is every day, every month, every year. Politicians are, for the most part, a craven, finger-pointing-in-the-windy bunch. Like Milton Friedman says, don’t wait for the right people to get elected; create the conditions whereby the wrong people are forced to do the right thing.

I’ve been addressing that topic as well for many years.

Buy the book “After America” and read it (it’s now available in paperback). The more people who do so — and then engage in the defense of liberty, the better the chances are that 2013 and beyond will be happier years than those before.