Note: Four more articles needed to be added to the list below a few days after this article first posted about Steve Bannon, but I’ll put them up top instead. I also added below an excellent talk by him exactly five years ago.

Steve Bannon, Civil Rights Hero
School choice is now a presidential priority. It could never have happened without Steve Bannon.

Are Bannon’s Critics for Real?
Inventor of term “Alt Right” explains why Bannon critics are full of hot air.

Bannon Critics Okay with Sharpton, Ellison
Steve Bannon is not a white nationalist. He is a patriotic American. Steve Bannon’s only real crime is helping to get Donald Trump elected President of the United States.

The fundamental transformation crowd has a new epithet: “alt-right.” Anyone who disagrees with them is open to being labeled thus, and it’s great, because it’s so much easier to say than “right-wing extremist” or “member of the vast right-wing conspiracy.”

What does it mean to be “alt-right”? Well, let me get back to you on that because it’s still being worked out. For now, just assume that you’ll have to wait for the person using it to fill in the awful details.

It’s comical — but we shouldn’t laugh because people are being harmed. The left-wing culture (media, the K-college government schools, Hollywood, etc.) continues to mislead millions of Americans. So many of our fellow citizens act as programmable robots, ready to believe whatever they read in the discredited leftist press or hear from a radical Democrat politician or Hollywood star.

Here’s a Drudge headline from today: POLL: 70% voters do not believe media honest and truthful… That’s the good news. The bad news is that the other 30% are vulnerable to fall for the lies. That translates into millions of people.

Here is one more Drudge headline from today:

We all know there are “fake” websites just as there are real “hate” groups. Since we know the leftist’s game, however, we can often see when they’re working on silencing more of their opponents.

Might the Googlefacebook liberals seek to imitate the Southern Poverty Law Center? SPLC is famous for its work studying hate groups like the KKK. Oh, but now pro-family organizations are also called hate groups by the SPLC. Yes, mainline Christian churches and organizations are so-labeled because they disagree with the childish LGBT agenda. 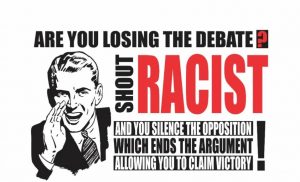 Americans won’t listen to a “hate” group, nor believe a “fake” website. See how that works? Clever, aren’t they?

President-elect Donald Trump has chosen American businessman and media executive Steve Bannon to serve as a senior adviser. We all know what follows — Bannon is called a racist, an anti-Semite. Wait, that’s not enough. He’s a member of the alt-right movement! Yes, that’s the ticket!

But is it true?

Of course as with everything, you have to choose what you want to believe. You can believe those who were telling us that Hillary Clinton should be and would be the president of the United States. Or, you can believe people who actually know and work with the man.

Why the Big Lie About Steve Bannon?
By David P. Goldman

All the existential rage of the defeated and humiliated elites is now focused against Steve Bannon — the architect of Trump’s victory, the media genius who won the battle with less than a fifth of the financial resources at Hillary Clinton’s disposal…

We have learned from the sewage-storm directed at Bannon that the Establishment plays dirty, and that the formerly Republican #NeverTrumpers aren’t just misguided ideologues, but also yellow-bellied, gutter-crawling, backstabbing, bushwhacking liars. Hell hath no fury like a self-designated elite scorned.

They hate Steve Bannon because he beat them, fair and square, on the battlefield of social media. He is the president-elect’s most effective general. Trump’s enemies can’t reverse the results of a national election, but they can try to cut the incoming president off from his popular base.

The charges against Steve Bannon are a tissue of lies without a modicum of merit.

The losers of the left have worked themselves into such a bizarre hysteria over the fact that they lost the White House that they have lost all connection to reality and are now hyping their most ludicrously paranoid fantasies… I can’t think of anything stupider than the charge coming from all quarters of the left–including a headline in the pathetically wretched Huffington Post–that Bannon is an anti-Semite.

The term “white nationalist” has crossed the lips of nearly every pundit, leftist politician, and race-baiter in the country in the last few days. Harry Reid said he wants President-elect Trump to rescind Bannon’s appointment.

The same corporate media outlets who ignored Obama’s affiliation with black nationalists; card-carrying communists; black separatists; and an anti-white, anti-Semitic Chicago preacher, and who refused to release a 2003 video of Obama attending a birthday bash for Israel-hater Rashid Khalidi with domestic terrorists Bernardine Dohrn and Bill Ayers in attendance, are calling Bannon a “white supremacist” and “anti-Semite.” That’s rich.

Bannon is white and conservative, and he loves his country. That’s Obama’s definition of a white nationalist. In Obama’s America, 60 million of us are Stephen Bannon.

Next up — a few more links — I was happy to see the discredited SPLC comment in this first article:

Added November 21st: We Must Push Back Against the Borkers of Bannon

VIDEO (conversation turns to Bannon at the 6:40 mark): Gingrich: Donald Trump Is A Mainstream Conservative, The Left Is “Hysterical”

Steve Bannon and Keith Ellison: Do the Democrats Really Care About Anti-Semitism?

This Is How Steve Bannon Sees The Entire World