Last month a Woolworth store in Germany made headlines in the UK and in the US for proclaiming itself to be a “Muslim” store, and therefore it would no longer carry Christmas items. There’s more to the story — as the local management of the store defended itself by saying that there was such little demand for the Christmas products, they decided the shelf space was better used with other items. You can read about it here, here and here and decide for yourself what to believe.

Christmas as controversy is not new, of course, as the debate over whether to say “happy holidays” or “merry Christmas” has long been a part of American pop culture. It even made an appearance in the 2016 presidential campaign as the question whether saying “merry Christmas” is offensive to some delicate ears. Donald Trump often said on the campaign trail that if he was elected, “we’re gonna be saying Merry Christmas at every store … You can leave happy holidays at the corner”:

With the election of Trump, a writer at New York Magazine weighed in:

And so it is apparently ‘safe’ for Christians to be rude to their Jewish, Muslim, Buddhist, Hindu, or nonreligious friends and colleagues by regaling them with sectarian holiday greetings. The war on common courtesy has apparently been subordinated to the war on ‘political correctness.’

Dennis Prager, who is Jewish, has a different take (the video is embedded below):

I’m a non-Christian. I’m a Jew. Christmas is not a religious holy day for me. But I’m an American, and Christmas is a national holiday in my country. It is, therefore, my holiday — though not my holy day — as much as it is for my fellow Americans who are Christian. That’s why it’s not surprising that it was an American Jew, Irving Berlin, who wrote “White Christmas,” one of America’s most popular Christmas songs. In fact, according to a Jewish musician writing in the New York Times, “Almost all the most popular Christmas songs were written by Jews.” Apparently all these American Jews felt quite included by Christmas!

By not wishing me a Merry Christmas, you are not being inclusive. You are excluding me from one of my nation’s national holidays.

The vast majority of Americans who celebrate Christmas, and who treat non-Christians so well, deserve better.

The American Family Association has posted a version of a naughty and nice list with its “Rating the Top Retailers and How They Market to Christmas Shoppers.” They divide up American businesses into three categories: Nice, Marginal, and Naughty — this is from their website: 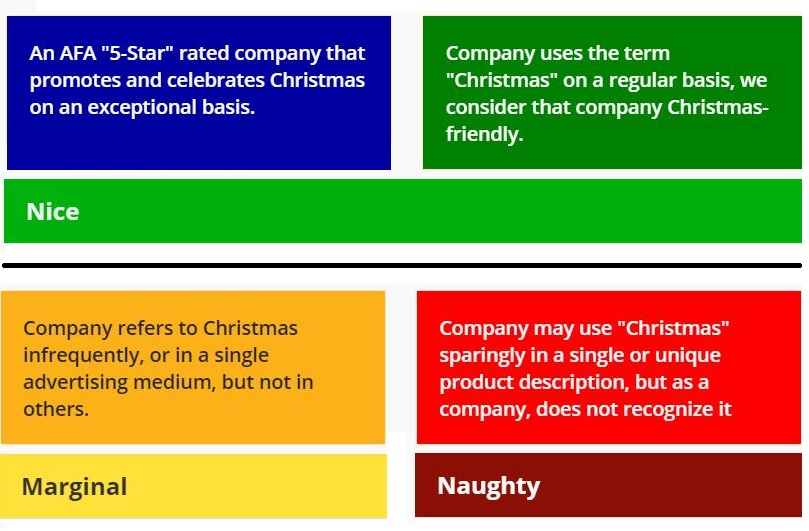 Among the Nice “5-Star” companies listed are Walmart, Cracker Barrel and Hobby Lobby. At the other end of the spectrum — the Naughty kids — are companies like Barnes & Noble, Best Buy and Pet Smart. Pet Smart may carry Santa suits for dogs, but we all know Santa doesn’t exactly serve to emphasize the “Christ” in “CHRISTmas,” so that doesn’t count.

Before you head out the door for another round of Christmas shopping, visit the American Family Association’s “Naughty (and Marginal) and Nice” list. AFA even invites recommendations for their list, though they don’t include local or regional companies — only nationally-recognized companies.