One huge example of the failings of our public school system is seen when you ask most Americans to tell you what they know about important events in our history such as the Meuse-Argonne battle.

On September 26, 1918, soldiers of the American Expeditionary Force (AEF) in France began to fight the last great battle of the Great War, World War I. It lasted 47 days, ending with the armistice at the “eleventh hour of the eleventh day of the eleventh month.” Armistice Day is now celebrated as Veteran’s Day.

The numbers are staggering. Total American troops involved: 1.2 million. Killed: 26, 277. Wounded: 95,786. Most of those casualties actually took place during the heaviest fighting during a three week period. Something of this magnitude should receive attention between seventh and twelfth grade history class, wouldn’t you agree?

Fortunately, two new books have come out about the battle. To Conquer Hell by Edward G. Lengel, and America’s Deadliest Battle by Robert H. Ferrell. Anyone who wants to learn more about what they should have been taught in public school should pick up both books.

Edward Lengel opens his book with the story of Reese Russell, “a tall, slender, fun-loving and handsome young man” from Virginia who registered for the draft in 1917. A paragraph later readers learn that after “less than a week in combat in the fall of 1918, he was evacuated to the rear, with poison in his lungs and demons in his mind. Neither ever left him.”

— a tale of heroism-of untested draftees and recruits who went up against the best-trained army in the world, and drove it from some of the strongest defensive terrain in France. It is also a chronicle of tragedy-of thickheaded nationalism and military ineptitude that sent thousands of men uselessly to their deaths. 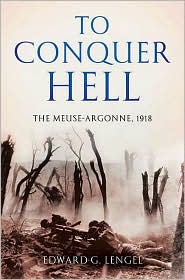 Lengel notes that when Russia withdrew from the war in 1917, Britain and France braced for the German troops that would be freed up and sent to the western front. Fortunately America entered the war and brought the firepower and the will to drive the Germans back.

Lengel explained in a speech earlier this year that by 1918, after four years of brutal fighting and almost incomprehensible losses, there was little fight left in the French army. They could defend but not advance.

It’s doubtful the allies could’ve won had not the “doughboys” of the American Expeditionary Force fought, bled, and died. It’s also doubtful, however, that so many needed to die on the way to that victory. One writer summed up Robert Ferrell’s book this way:

Ferrell reexamines factors in the war that many historians have chosen to disregard. He points first to the failure of the Wilson administration to mobilize the country for war. American industry had not been prepared to produce the weaponry or transport ships needed by our military, and the War Department-with outmoded concepts of battle shaped by the Spanish-American War-shared equal blame in failing to train American soldiers for a radically new type of warfare.

Our soldiers were too often poorly trained, lacked knowledge of tactics, and faced a German army that “held the upper hand” through much of the 47 day struggle.

Ferrell quotes at length from one survivor’s experience on October 4th:

Groups of our lads dashed up to the wire only to be shot down to the last man. Some ran through a passage made from the roadway, the only possible method of getting through, but this of course was absolutely covered by the German guns, and every man that went through it was shot and, if not killed outright, taken prisoner. Soldiers of ours and of the Engineers with wire-cutting tools lay on their faces working madly to cut through the strands, while riflemen and grenadiers alongside of them tried to beat down the resistance. But they were in a perfect hail of bullets from front and flank, and every last man was killed or wounded. 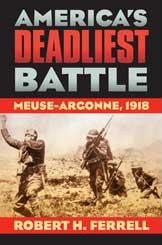 Ferrell writes that by the end of the battle of the Meuse-Argonne, “American divisions had finally learned up-to-date tactics, and their final attack on November 1 is now seen as a triumph of military art.”

This past summer I wrote of my visit to the Meuse-Argonne American Cemetery that is located on land won by our soldiers during this battle in the fall of 1918. It’s an incredibly beautiful place and should be visited by every American traveling in Europe.

Near the end of his book, Edward Lengel quotes AEF veteran Louis Ranlett of the 2d Division, who in the years following the armistice explained why soldiers didn’t talk about the war:

It is true that the boys do not talk about the war. The reason is not because the war is something not to be thought of. The boys would talk if the questioners would listen. But the questioners do not.

We owe it to those men to know their stories. And we owe it to the rising generations to insist that they also learn about and never forget what started on this day ninety years ago.