The anti-baby forces are already out in full force as they stake a claim to your tax dollars to pay for their abortions. Using the dishonest and tired rhetoric of a “war on women,” the death industry seeks to punish legislators who voted against HB 40, a bill that would remove all restrictions on taxpayer funding of abortion.

One case in point is that of State Representative Mark Batinick (R-Plainfield), who was featured in one ad, asking people to call his office to ask him why he didn’t “stand up for women’s rights.” Yes, you read that correctly: they believe it is now a “right” for a woman to end the life of their baby and have you pay for it! 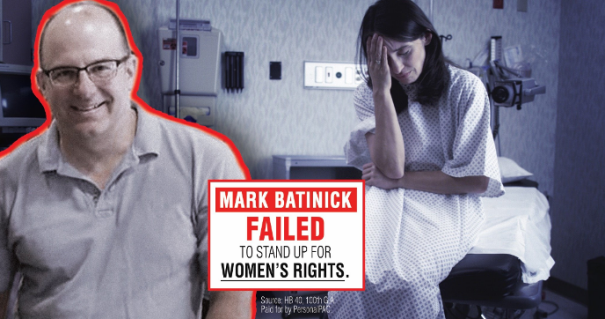 With sixty million abortions since Roe v. Wade’s passage, one could easily make the case that we have seen a forty-plus year war on the unborn. Only the death tolls caused by the 20th century’s most evil dictators Stalin and Mao rival the number of unborn lives taken “legally” in the United States since 1973.

State Rep. Batinick voiced his opposition to HB 40 (taxpayer funded abortions) on the state house floor and explained how the bill had been deceptively sold to the citizens of Illinois. Even much of the debate in Springfield, according to Batinick, served as a “smokescreen to obscure the real purpose of the legislation.”

The fact that dishonest arguments are being made in support of HB 40 is no surprise, and neither is it a surprise that the anti-baby lobby is encouraging their supporters to call legislators like Rep. Batinick. Pro-life voters need to help get the word out about the facts regarding taxpayer funding legislation. Taxpayers should also call the legislators who opposed the bill and thank them for standing up to protect unborn babies and taxpayers.

HB 40 has passed both the state house and state senate and has been sent to the governor’s desk. Those who want to protect the life of unborn children should call Governor Bruce Rauner and ask him to veto the bill.

You can view how your state representative voted here HERE, and your state senator HERE.

Help us spread the word and activate other pro-lifers
by supporting the work of IFA: