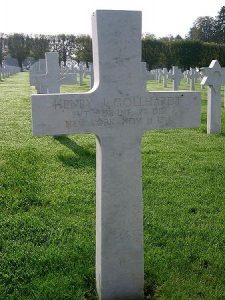 The gravesite of Henry J. Gollhardt, one of the many soldiers who died ninety years ago today.

The events portrayed fictionalize what actually took place ninety years ago today. On the morning of November 11, 1918, the Signal Corps confirmed the dispatch along the western front – the shooting was to stop at 11:00 a.m. in accordance with agreement reached between Germany and the Allied Powers. It is very odd to think that men continued to fight and die up until that 11th hour of the 11th day of the 11th month, but they did.

John Keegan writes in his acclaimed book “The First World War,” that when the war began in 1914 it —

— “came out of a cloudless sky, to populations which knew almost nothing of it and had been raised to doubt that it could ever again trouble their continent.”

On a cloudless day eighty-seven years later in New York City the same could be said concerning the events of 9-11-01. Seven years later, because of correct and courageous action by President George W. Bush we haven’t been attacked again. He has been so successful, in fact, that it appears much of the electorate thinks the danger has passed.

— “the rational and liberal civilization of the European enlightenment, permanently for the worse and, through the damage done, world civilization also. Pre-war Europe, imperial though it was in its relations with most of the world beyond the continent, offered respect to the principles of constitutionalism, the rule of law and representative government. Post-war Europe rapidly relinquished confidence in such principles.”

In college during the 1980s, I was taught about the three great crises of American history: the founding era, the Civil War, the Great Depression/World War II era. My professors, who have since passed away, didn’t even include the Cold War — which was then in its final years.

“Its origins are mysterious. So is its course. Why did a prosperous continent, at the height of its success as a source and agent of global wealth and power and at one of the peaks of its intellectual and cultural achievement, choose to risk all it had won for itself and all it offered to the world in the lottery of a vicious and local internecine conflict?”