If you haven’t yet read the piece by Matt Labash about the city of Detroit in the Weekly Standard you should – the link is here. The article is long but well worth the time. The title and subtitle are as follows:

The City Where the Sirens Never Stop

Detroit is dying. But, it is not yet dead.

Reading about the economic, cultural and sociological decay that is Detroit reminded me of neighborhoods that I’ve seen on Chicago’s south side for decades. When I was a kid it was on the way to White Sox games at Comiskey Park. In my thirties, I had a job that required me to visit parts of Chicago on a weekly basis that no one would unless they had to.

Hyde Park, the neighborhood where Barack Obama’s Illinois home is located and from where he first got elected as state senator, is an enclave of civilization surrounded by sections of Chicago where “hope and change” have been needed for decades but haven’t been seen.

Neither state Senator nor U.S. Senator Obama brought hope or change to those neighborhoods. As President of the United States he hasn’t the first clue how to revitalize his own city, let alone disasters like Detroit. If he had, we would’ve seen evidence of it by now. All Obama knows is big government and no where in history has big government been shown to work.

Higher taxes, an attempt at the redistribution of wealth, and expanding failed bureaucracies are always on the Democrat’s agenda. The coddling of corrupt private and public sector labor unions are at the top of their list of failures. Government spending that chokes private initiative, kills investment, prevents economic growth, and strengthens those who fight against real change is the order of the day. 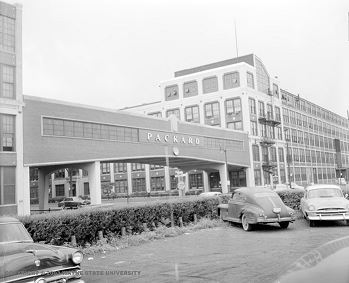 The Packard plant then.

Like Democrats, Republicans haven’t done much better at addressing the problems of inner city America. It’s not because there aren’t policy experts within their ranks who don’t know the solutions. The problem has always been and continues to be that the leadership and their staff hasn’t had the will or the imagination to apply those solutions. The people who have held positions of power within the GOP are mostly small people in big jobs.

The domestic policy experiment that the Obama Administration is about to try is doomed to fail unless he moves drastically to the political right. Even Bill Clinton understood that we had to end welfare as we knew it. Instead, President Barack Obama plans to expand welfare dramatically and call it a tax cut. 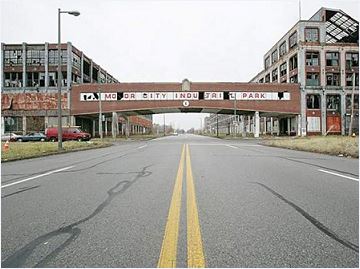 The challenge ahead for Republicans is clear. We need a renaissance and reformation headed up by new leaders. Governors like Louisiana’s Bobby Jindal are the future. Puffy white guys in the Dennis Hastert mold will never reach nor convert enough voters in this increasingly minority-majority nation.

The limited government and traditional values called for in the Republican Platform are the cure for what ails both Detroit and large sections of President Obama’s Chicago. As an aside, there were more murders in Obama’s Chicago last summer than American soldiers killed in Iraq.

A vibrant economy and a healthy social fabric aren’t the result of magic, and they sure don’t happen because big city or Washington, D.C. Democrats get their way.

“Detroit has failed,” Matt Labash writes, and many of the people there are stuck “living among the ruins.” Here’s a safe bet: things won’t be any better there in November 2012 as voters go to the polls to decide whether they’ll want another four years of Obama economics and social policy.

The big question is whether the Republican Party will have gotten its act together by then. Will the party have elevated new leaders, recruited better spokesmen of all races, and sold the GOP prescription to where themedicine is sorely needed?

The Democrat Party platform does not have the solution to what ails the country. In fact, their largest client, the teachers unions, are the perfect illustration of how to guarantee continued failure. Those unions stand in the way of school choice, the only path to improving the schools so the rising generation will understand how to achieve economic prosperity and cultural strength.

While they had the chance, Republican leaders at all levels failed to enact or even sufficiently advance GOP domestic policies. In Illinois, the failures occurred during the 26 years they held the governor’s mansion and the ten years they held the state senate in the 1990s. Nationally, Republicans held the U.S. House for a dozen years and the White House for eight.

For those of you who are up to a challenge, you need not move to Detroit. We have the political equivalent right here with the Tom Cross/Christine Radogno/Andy McKenna led GOP. There’s no need to rent a U-Haul and head to Michigan. Hope and change is needed right here in President Obama’s home state, especially in the neighborhoods surrounding that Hyde Park enclave.

Join the renaissance. Crash the party. The work continues today.

Photo above article: Lutheran cemetery and the Packard plant, which closed in 1956. (Photo credit: click here.)