This is the last in a series.

John Fund had an article in the Wall Street Journal on July 12th titled, “Obama’s Liberal Shock Troops,” and in it he outlined how big money and big activists are working together on the radical left wing to turn public opinion in their direction.

In addition to Barack Obama’s victory over the Clinton Machine, Fund writes, liberals are also—

on the march on the presidential level. This year, liberal activists are spending parts of the fortunes of their wealthy donors to transform politics at the state and local level.

While they do that, the political right fiddles. Despite enormous evidence showing that they’re on the wrong track, Republicans cling to their current mentality and leaders and conservatives still assume that think tanks and talk radio can save the day.

Fund writes that the left’s money guys are helping to lead the effort:

In 2005, billionaire investor George Soros convened a group of 70 super-rich liberal donors in Phoenix to evaluate why their efforts to defeat President Bush had failed. One conclusion was that they needed to step up their long-term efforts to dominate key battleground states. The donors formed a group called Democracy Alliance to make grants in four areas: media, ideas, leadership and civic engagement. Since then, Democracy Alliance partners have donated over $100 million to key progressive organizations.

We know plenty of money is being made by people with conservative political views, but so far we haven’t seen any sign that there is any similar effort on the political right.

Fund gives an example of what the political left has done in one state:

Take Colorado, which has voted Republican for president in nine of the last 10 presidential elections. But in 2006, Colorado elected a Democratic governor and legislature for the first time in over 30 years. Denver will be the site for the party’s 2008 presidential convention. Polls show Barack Obama would carry the state today. This hasn’t happened by chance. The Democracy Alliance poured money into Colorado to make it a proving ground for how progressives can take over a state. 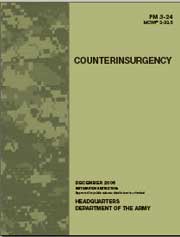 I’ve written at some length about some of the changes needed from our Republican party and elected leaders. Of course the political left has one important advantage over the right. Their leaders actually believe in the left-wing cause, and their money people aren’t easily fooled. Rich liberals seem more inclined to apply a metric.

General David Petraeus’ “Counterinsurgency” field manual is refreshing reading because it represents professionalism and clear thinking applied to a life or death situation. It’s important to remember that our military answers to our civilian leadership. This quote opens the introduction:

This is a game of wits and will. You’ve got to be learning and adapting constantly to survive.

For all the bad news from our side of the aisle we can at least thank heavens that smart people still run the military. Wits and will? Both lacking in the Republican Party. Constant learning and adapting? Not if you consider putting a new wing on the latest think tank or spending a great deal of money to reelect Republicans who continue to shirk their responsibility to help shape public opinion.

Here are a few good lines from the introduction:

As learning organizations, the Army and Marine Corps encourage Soldiers and Marines to pay attention to the rapidly changing situations that characterize [counterinsurgency] operations. Current tactics, techniques, and procedures sometimes do not achieve the desired result. When that happens successful leaders engage in a directed search for better ways to defeat the enemy.

“The side that learns faster and adapts more rapidly wins.”

Republicans must relearn the principles of basic communications. The founders understood it, as did Abraham Lincoln and Teddy Roosevelt and Ronald Reagan. It’s only the more recent Republican elected officials who have forgotten that they aren’t clerks but “opinion leaders.” If they’re not attempting to shape public sentiment, they’re useless to every right cause.

The Petraeus manual states that “counterinsurgents often have to ‘come from behind’ when fighting an insurgency.” Well, that sure is the case in 2008 America. Republicans must mirror the Counterinsurgency “Learn and Adapt” imperative.

In the first of this series I mentioned that the left has a huge head start. The liberal/socialist insurgency that rose up in this country during the last century is still on the march and a counterinsurgency is necessary to bring us back to our first principles of limited government and traditional values.

Republican politicians can’t even handle domestic politics, so it’s a good thing they’re not calling the shots on the ground in Iraq.

The left isn’t going to stand still even if our side finally starts to move. The challenge ahead is not all that different from what the American military faced in 2007 in Iraq during the troops surge. We must expect the “learning cycle” to repeat continuously,” and we must “seek to learn faster than the insurgent enemy.”

If anyone thinks we’re going to be able to do that with our current political and party leaders than they’re more optimistic than I am. But to paraphrase Donald Rumsfeld, we’re forced to go to war with the military we have. God help us in the short term. In the medium and longer term we need a Republican renaissance. To get an idea of what the political reformation looks like that we’re calling for, read “Counterinsurgency.”

The introduction’s final paragraph includes this:

[Counterinsurgency] campaigns are often long and difficult. Progress can be hard to measure, and the enemy may appear to have many advantages. Effective insurgents rapidly adapt to changing circumstances.

But it also says that if the good guys, through concerted effort, truly function as a learning organization, insurgent forces can be defeated.