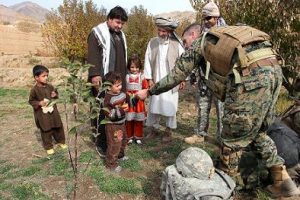 Lisa Curtis of the Heritage Foundation had this to say about the road forward:

Without American leadership in Afghanistan – the entire civilized world will remain hostage to international terrorists intent on attacking innocents at the times and places of their own choosing.

“American resolve is the irreplaceable ingredient for victory” – but our nation is our people, not our politicians. So those we elect must win public support for any policy.

The current Administration has said the U.S. will stay in Afghanistan – what remains to be seen is what strategy we’ll pursue.

Here is a simplification of the four options we have:

The American public has never been adequately informed about our challenges in the wars we’ve been fighting since 2001. As a result, they’re low on patience. I addressed that communication failure here.

There are similarities between what happened in Iraq and what is happening now in Afghanistan. American military officials were and many still are leery of the “large footprint” strategy where a large force is deployed (this topic is also addressed here). What follows are a few excerpts from an article by Robert Kagan where he sums up what has happened:

Failings in the American military strategy in 2001–notably the refusal by Defense Secretary Donald Rumsfeld to deploy ground forces to cut off the retreat of al Qaeda fighters from northern Afghanistan–allowed both Taliban and al Qaeda leaders and troops to escape.

The United States, after successfully toppling Saddam, immediately began to fumble the task of bringing order and stability to post-Saddam Iraq. There were many reasons for this failure, including the combination of bad judgment and bad luck that can occur in any war and the inherent difficulties of a fractious Iraqi society.

But part of the problem was the worldview that many top Bush officials still retained from the 1990s and the early days of the administration. Top officials at the Pentagon were still wedded to the concept of “strategic pause” and hostile to a heavy reliance on ground forces. In addition…the Republican realists’ allergy to nation building persisted.

The consequence, in both Afghanistan and Iraq, was the deployment of too few troops to take effective command of the countries and to suppress the inevitable power struggles following the fall of the previous dictatorships and too little civilian capacity to undertake the massive social and economic regeneration necessary in the inescapable task of postwar national reconstruction. In Iraq, these errors became apparent within months of the invasion. It took the administration another four years to adjust.

The good news, Kagan writes, is that “The United States’ position in the world today is not nearly as bad as some claim.”

– knows that the American public is impatient and that the counterinsurgency strategy will take time to work, but there is really no alternative unless we are willing to cede Afghanistan to the Taliban and their al Qaeda allies.

A narrow counterterrorism strategy focused on simply killing insurgent leaders has never defeated any determined group of guerrillas or terrorists. It may seem like we’ve been at war in Afghanistan for eight years, but given the lack of resources for most of that time, the war effort is really less than six months old in critical parts of the country. ‘We are essentially where we were in Iraq in 2004,’ one American colonel told me. ‘We’re just getting started.’

The old tactic of going into an area, killing some insurgents, and leaving was about as effective as ‘mowing the lawn,’ in the words of another coalition officer. That has been replaced with the classic ink-spot strategy of slowly spreading government control from one population center to another. After this summer’s operations, a few such ink spots are scattered across the Afghan landscape in places like Baraki Barak. But as one Marine battalion commander in the south told me, ‘For an ink-spot strategy to work you need enough ink.’ The coalition still has too little.