Thank you again to Wirepoints for telling the truth about how taxpayers are being lied to yet again. Here is Mark Glennon:

Reporters and politicians in both parties too numerous to name are calling the new Illinois budget “balanced,” and many are bragging about it. It passed the General Assembly today and Governor Rauner says he will sign it. 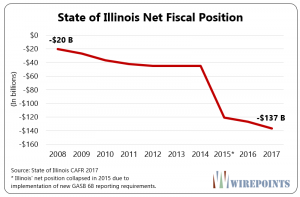 That’s right, about $10 billion lost on average each year. That’s for all state funds. If you happen to be interested in the General Fund in particular, it was in deficit by $14 billion last year.

It’s not just the routine gimmicks used to cover up a billion or two dollars using phony budget accounting, though there’s plenty of that again this year that we already know about. Ted Dabrowski wrote here earlier today about some, and we’ll no doubt find more as we digest the 1,200 pages the General Assembly got only hours before voting.

The vastly bigger problem is accruals — running up bills with no way to pay, especially unfunded pension liabilities — that don’t show up in the budget. For further explanation, see our earlier article linked here.