This is so disgusting…words fail. Just the headline — “Incomes in top 50 Illinois cities can’t keep pace with state pensions” is enough for conservatives to win elections — if they only knew how to fight the information war. Here are Ted Dabrowski and John Klingner:

Illinois household incomes have struggled to keep pace with inflation over the last three decades. In fact, incomes in 40 of the 50 largest Illinois cities are down compared to 1990 once inflation is taken into account. From Normal to Rockford to Waukegan – and even well-to-do Schaumburg – all have experienced income growth lower than the 2.4 percent yearly inflation average since 1990.

Household incomes have been hit by the nation’s highest property taxes, a struggling economyand a weak job market. But now gubernatorial candidates Daniel Biss, Chris Kennedy and JB Pritzker want to hit Illinoisans with another tax hike – most of which will go to pensions.

That wouldn’t be fair, given new research just released by Wirepoints. Residents in cities across Illinois should know what they’re paying for.

Total pension benefits are overwhelming the state and the ordinary Illinoisans’ ability to pay for them. 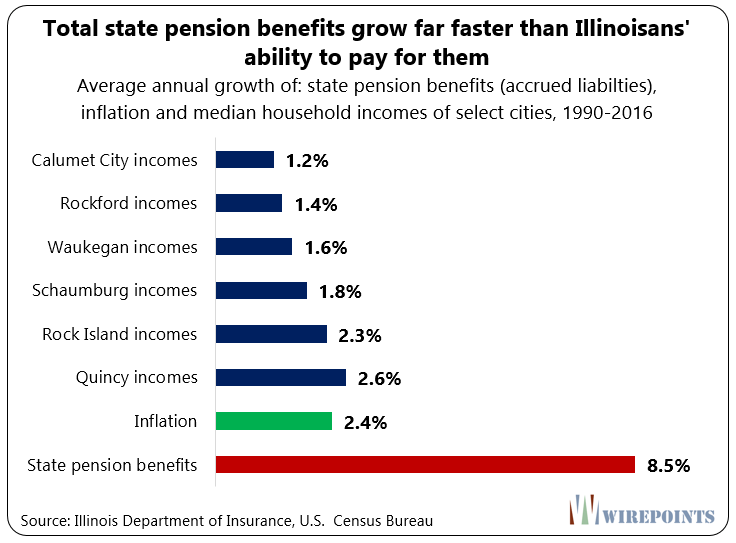 Even compared to Plainfield, which had the highest annual household income growth of Illinois’ largest 50 cities outside Chicago, pension benefits owed to state workers still grew 2.25 times faster than the city’s incomes.

When measured over the whole period of 1990-2016, pension benefits grew 736 percent while household incomes in Plainfield grew just 167 percent.

The impact on residents in cities with slower income growth is even more dramatic. Residents in cities like Rockford and Danville have seen their incomes lose ground to inflation. Inflation is up 84 percent over the entire period, while household incomes there have grown less than 50 percent.