I wrote about this trial here, as it represents how every single issue works. Once people learn about reality they’re more likely to stop denying it. Before getting to the article from LifeSiteNews excerpted below, get this headline from the Chicago Tribune in their news alert (what is it that they think abortion doctors do?): 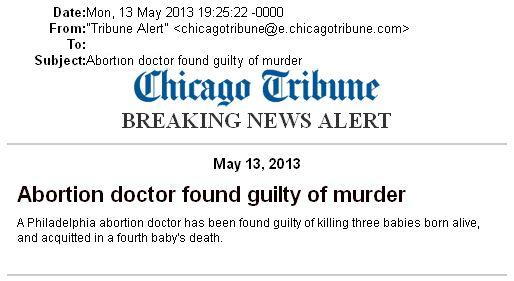 He is also guilty of involuntary manslaughter in the 2009 abortion death of Karnamaya Mongar, a 41-year-old legal immigrant who died when his untrained staff administered an overdose of sedatives.

The jury found Gosnell guilty of murdering Babies A, C, and D. Gosnell quipped Baby A, who was photographed by one of his employees, Andrienne Moton, was big enough to “walk me to the bus stop.”

Jurors found Gosnell had committed first-degree murder when he allowed the babies to be born alive, then “snipped” their spinal cords with scissors — a practice his employees said they saw him perform “hundreds” of times.

The verdict, which was announced this afternoon in the courtroom of Judge Jeffrey Minehart, means Gosnell will face the death penalty at sentencing. Sentencing is scheduled for May 21.

Here is the Heritage Foundation’s take on the verdict: