Having been born in Chicago and for many years a resident of suburban Cook County (now I live in Kane County), vote fraud is nothing new to me. None of the many articles on the topic that I’ve linked to over the years has surprised me. Here is Thomas Lifson writing at American Thinker:

You wouldn’t know it based on mainstream media coverage, but President Trump’s Advisory Commission on Election Integrity is developing strong evidence of serious vote fraud, large enough to swing the results in key elections. The fact that Democrats mostly deny the possibility of important vote fraud and seek to shut down inquiry ought to tell anyone with two brain cells to rub together that they know which party is the beneficiary of the cheating.

The fact that the dominant political media which continue to call themselves “news” outlets mostly are ignoring the startling revelations coming out of the Commission’s hearings also tells you that the problems is serious enough to suppress.

The characteristic response of the left is suppression of the facts, combined with the absurd theory that ensuring voter integrity means “suppressing” votes. TYhis ognores the fact that an illegal vote also “suppresses” the vote of an honest, qualified voter who voted the opposite way. See this graphic, featuring Kris Kobach, the chair of the commission: 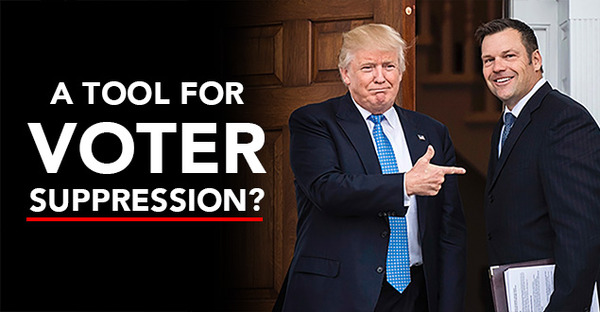 Hans von Spakovsy is both a member of the Commission and a staffer at the Heritage Foundation who has developed a database on election fraud. He has a must-read article on the Daily Signal, Heritage’s own site, outlining some of the most recent evidence heard at the last hearing of the Commission. Here is a sample. Read the whole thing.

Donald Palmer, the former chief election official in two states—Florida and Virginia—testified about the problems that exist in state voter registration systems…