Tsunamis of bad news — Wikileaks, profane videos, election fraud — threaten to overwhelm even the wonkiest among us. Then, just in the nick of time comes this video, with Sheriff David Clarke talking solid, conservative values in an unapologetic fashion. Clarke is righteously riled up, for good reason.

Sheriff Clarke spoke at a recent Trump for President rally in Green Bay, Wisconsin, and absolutely lit up the Cheesehead venue.

Who is this sheriff? His bio from the Milwaukee County site:

Milwaukee County Sheriff David A. Clarke Jr. is a law enforcement executive with 38-plus years of experience. His public service career began in 1978, at the Milwaukee Police Department (MPD), where he served 24 distinguished years. During his eleven years as a Patrol Officer, he received meritorious citations for felony arrests.

Clarke was promoted in 1992, to Lieutenant of Detectives and was assigned to the Criminal Investigation Bureau as Shift Commander of the Crimes Against Property Division, the Violent Crimes Unit, and again to the Homicide Division. In 1996, he was promoted to MPD’s command staff as Captain of Police, and soon became Commander of the Department’s First District.

In September 2013, after completing a rigorous master’s degree program, Sheriff Clarke received an M.A. in Security Studies from the U.S. Naval Postgraduate School, Center for Homeland Defense and Security, in Monterey, California.

Wow! And that’s a mere slice of his impressive bio. Anyone thinking what I’m thinking? America needs Sheriff Clark heading up something like DHS?

Watch his speech and judge for yourself:

Blue lives matter! I tell you what, it’s been real interesting these last several months. You know when the Donald Trump Campaign reached out to me and asked me to be a part of the campaign,I said, “Mr. Trump, I don’t know what I can do for you, but I tell you what, put me in the trenches because I’m a fighter!”

I’m a brass-knuckled, bloody-knuckled type of fighter. Now I know that kind of language makes the Left, the Leftist Media cringe. and they’ve been trying to shut me up, especially for the last 30 days. Can you tell it’s not working?

There’s only one reason they’re trying to shut me up — because they know my message is effective and it’s having an effect, otherwise they wouldn’t pay any attention to me.

I’ve been critical of this hate group called Black Lives Matter. I’ve been critical of the corruption, the lies of Mrs. Bill Clinton. And it’s amazing that just recently I put out a tweet — you may have heard about it, you may not have. And I talked about the corruption going on and how the liberal Mainstream Media is colluding with the Clinton Campaign to influence the election while Mrs. Bill Clinton gets out there and accuses the RUSSIANS of trying to influence our elections!

Sheriff David Clarke’s thirteen minute speech was a barn-burner and the crowd responded, understandably, with unbridled enthusiasm. The good Sheriff deserved that response.

America needs patriots everywhere to stand up and speak up, just like the good sheriff. 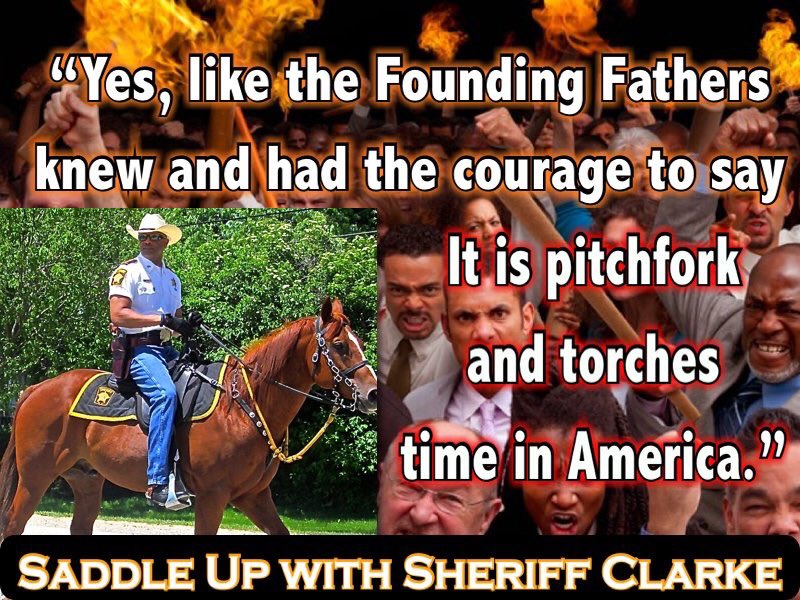 Big Media must condemn Sotomayor’s desire to do violence like they did about me saying pitchforks and torches time. http://www.nydailynews.com/news/national/sotomayor-thought-hitting-scalia-baseball-bat-article-1.2835556 …

God bless you Sheriff Clarke! Thank-you for standing up fearlessly!

America needs more bloody-knuckled fighters for our Constitution and liberty, or, in the words of the troops and special forces I know, “For God and country!”