Note: It was my pleasure to meet Amy Contrada three years ago, and since then I have followed her important and courageous work in defense of Judeo-Christian values. I just purchased her new book and look forward to reading it. Below is a promo for the book from MassResistance, the terrific organization Amy works with. It’s posted with their permission. 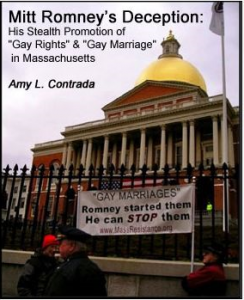 Titled, “Mitt Romney’s Deception: His Stealth Promotion of ‘Gay Rights’ and ‘Gay Marriage’ in Massachusetts,” it is a fascinating and thorough record of the sexual-radical activism that took place during that time, whether for same-sex ‘marriage’ or school programs promoting GLBT ‘rights.’ It contains a lot of information never published before.

The book is a rare combination of political history and analysis, enlivened by uncompromising commentary from a front-line activist. Contrada documents how Massachusetts Governor Mitt Romney actively supported the homosexual and transgender agenda on same-sex ‘marriage,’ sexual-radical indoctrination in the schools, and societal transformation – while posing as a defender of the Constitution and traditional family values.

It has nine chapters and nearly 900 detailed footnotes, directly linked to sources. It includes a compendium of Romney’s public statements related to ‘gay rights’; contemporary commentary; a detailed timeline covering Romney’s implementation of same-sex marriage; extensive detail on sexual-radical indoctrination in the Massachusetts schools; and many previously unpublished photographs.

The book has gotten immediate praise from some of the big names in this movement:

“It is gratifying to finally read a book that penetrates the cloud of propaganda that the media, the establishment Republicans, and yes, even some so called ‘conservative’ leaders have woven around Mitt Romney and his past. Amy Contrada documents in great detail how Romney was perhaps America’s most pro-homosexual governor. Candidates should be judged by their past actions, not by their rhetoric.”

“This book could not be more timely, nor more thorough in presenting the case against a Romney presidency. Ms. Contrada has given a gift to America by exposing the faux ‘conservatism’ of former Governor Mitt Romney.”

“In writing the meticulously documented Mitt Romney’s Deception, Amy Contrada has done the job that the liberal media was supposed to do. What she has uncovered is stunning even to experienced critics of Romney’s equivocation on homosexual issues. Contrada lays bare Romney’s servile embrace of the radical Massachusetts ‘gay’ agenda. Then she exposes his subsequent doublespeak in posing as the stalwart defender of traditional marriage in his bid for the GOP presidential nomination.”

Vicious attacks from the usual suspects

The book has also drawn immediate attacks. Within hours of the book’s appearance on Amazon, a Romney supporter posted a “review” attempting to discredit the book (but apparently hadn’t even read it). There will surely be many of those.

Also, a local GLBT activist began a libelous “discussion” on the Amazon page — spreading one of their old lies about her family.

This book is a must-read for anyone who is interested in the upcoming presidential primaries, in understanding how “gay marriage” happened in America, and how the homosexual agenda in the public schools (and elsewhere) became so powerful. You will learn a tremendous amount!

See much more about Amy and the book at her new website: www.AmyContrada.com

The book is currently available as a download from Amazon.com.
It is downloadable for the PC, Mac, Blackberry, Kindle, iPad, and other formats (with free reading apps). The price is $9.99.

A hardcopy version is planned.