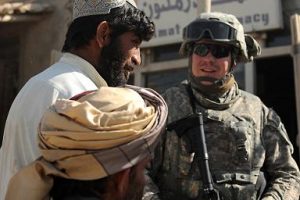 U.S. Army Spc. Hyrum Robb speaks with a shopkeeper at the bazaar in the district of Qara Bagh, Afghanistan, Oct. 29, 2009. Robb is assigned to the Civil Military Operations Center. U.S.A.F. photo by Master Sgt. Sarah Webb

To wrap up this series of notes on the war in Afghanistan, what follows are links to five descriptions of how the United States can win. First up is the link to General McChrystal’s redacted report:

Next is a study by the Institute for the Study of War at the American Enterprise Institute:

Create conditions in Afghanistan to prevent the re-establishment of safe havens for al Qaeda and other trans-national terrorist groups.

Establish sufficient stability to ensure that these conditions can be sustained over time with foreign financial assistance but with very limited foreign military presence.

Next are excerpts from three worthwhile articles on the War in Afghanistan. Posted in chronological order. (With emphasis added.)

How to Win in Afghanistan
It’s time to adjust the strategy.
By Christopher D. Kolenda
October 13, 2008

How is it that we find ourselves unable to dispatch the Taliban seven years after their downfall? Winning in Afghanistan requires us to understand the changed nature of the war we are fighting and to adapt our strategy appropriately. Simply killing militants is not enough.

The war in Afghanistan is no longer purely a counterterrorism effort against al Qaeda and the senior Taliban leadership. It bifurcated long ago, and its second branch is a counterinsurgency against a range of groups who are flouting both the central government and the traditional authority of village and tribal elders and moderate mullahs. Often well funded by the Taliban or other enemies of the Afghan government and the coalition, and sometimes incorporating foreign fighters, these groups use money and guns to recruit from the vast pool of illiterate young men who see only continued poverty in the village and tribal status quo. The militants find their opportunity in the unraveling of the social and economic fabric since the Soviet invasion.

Against this shifting alliance of convenience between well-funded extremists and local malcontents, the Afghan government is fighting for its life. Historically decentralized, Afghanistan is a polyglot state made up of myriad ethnic groups and tribes. The present collapse from within, therefore, will not likely be defeated from the top down. While building up the central government is important, that effort will be in vain without a complementary effort to build systems and institutions at the local level, which can eventually be connected to the national government. Accepting and working within the decentralized reality of Afghan society is essential to defeating the insurgents.

Beyond that, the changed nature of the war makes necessary four key strategic adaptations.

How to Win in Afghanistan

A minisurge is not enough. We need more Afghan security forces.

The war in Afghanistan is not going well, and the critical problem is the same one that dogged our efforts in Iraq for years: grossly inadequate troop levels. Western troop totals there have just inched over 60,000, while Afghan security forces total some 140,000. Let’s put this into perspective: We are trying to do with 200,000 personnel what it took 700,000 soldiers and police (plus 100,000 “volunteers”) to accomplish in Iraq. But Afghanistan is even larger than Iraq, and more populous.

Helping the Afghanistan government recruit, vet, train and equip a total of 300,000 to 400,000 security forces will take time as well as money. Only some 40% of necessary American and NATO trainers are in place even for the current scale of effort. We have about 2,000 trainers in Afghanistan (compared with nearly 6,000 in Iraq), and NATO allies have just another 500. Doubling this scale of effort will take a new infusion of resources, including perhaps the transformation of some American combat brigades into what retired Army Colonel John Nagl describes as an Army adviser corps.

How We Can Win in Afghanistan

The terms counterterrorism and counterinsurgency have become common currency this decade in the wake of September 11, the invasion of Afghanistan, and the war in Iraq. To a layman’s ear, they can sound like synonyms, especially because of our habit of labeling all insurgents as terrorists. But to military professionals, they are two very different concepts.

Counterterrorism refers to operations employing small numbers of Special Operations “door kickers” and high-tech weapons systems such as Predator drones and cruise missiles. Such operations are designed to capture or kill a small number of “high-value targets.”

Counterinsurgency, known as COIN in military argot, is much more ambitious. According to official Army doctrine, COIN refers to “those military, paramilitary, political, economic, psychological, and civic actions taken by a government to defeat insurgency.” The combined approach typically requires a substantial commitment of ground troops for an extended period of time.

What else … must coalition forces do? McChrystal’s answer:

An effective “offensive” operation in counterinsurgency is one that takes from the insurgent what he cannot afford to lose-control of the population. We must think of offensive operations not simply as those that target militants, but ones that earn the trust and support of the people while denying influence and access to the insurgents.

The Counterinsurgency Guidance points out that firing guns and missiles can often make it more difficult to win “trust and support.”

While counterintuitive to a conventional military mind, such thinking is hardly novel for anyone familiar with the history of counterinsurgency. McChrystal’s advice to embrace the population and be sparing in the use of firepower has been employed by successful counterinsurgents from the American Army in the Philippines at the turn of the 20th century; to the British in Malaya in the 1950s and Northern Ireland from the 1970s to the 1990s; to, more recently, the Americans in Iraq. By contrast, counterinsurgency strategies that rely on firepower have usually failed, whether tried by the French in Algeria, by the U.S. in Vietnam, or by the Russians in Afghanistan.

The risk of the counterinsurgency approach-which helps to explain why it has not been adopted in Afghanistan until now or in Iraq until 2007-is that, in the short term, it will result in more casualties for coalition forces. Placing troops among the people and limiting their expenditure of firepower makes them more vulnerable at first than if they were sequestered on heavily fortified bases and ventured out only in heavily armored convoys. But in the long term, as the experience of Iraq shows, getting troops off their massive bases is the surest way to pacify the country and bring down casualties, both for civilians and security forces.

What we have tried is the other strategy, the counterterrorism strategy, and it has been found wanting.