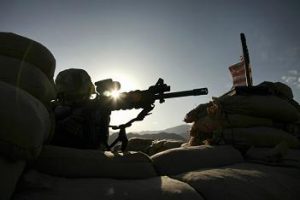 Our military and civilian leaders have a great deal of experience working with local leaders following the experience of the troop surge and counterinsurgency plan in Iraq.

Here is an edited passage from earlier this year in the Weekly Standard by Daveed Gartenstein-Ross & Joshua D. Goodman referring to “a 47-page memorandum written by Sheikh Ahmad Abu Risha, the leader of Iraq’s Awakening movement, and submitted to the American embassy in Kabul last spring”:

Abu Risha outlines some preconditions for success. First and foremost is the need for a strong leader…

Abu Risha emphasizes, however, that NATO should not try to establish new leadership in Afghanistan, but should work within the tribes’ existing hierarchies. “This is a nation,” he writes, ‘that does not accept changes or give up control easily without a fight.’

[According to] Sterling Jensen, who participated as an Army contract linguist in the U.S. government’s engagement with the Iraqi tribes as the Anbar Awakening was taking shape in the fall of 2006: ‘The Americans didn’t make the Awakening,’ Jensen says. ‘They didn’t make Sheikh Ahmed or Sheikh Abdul Sattar. You can influence some [local leaders’] thinking, but it’s going to be the Americans recognizing these kinds of leaders, and supporting them.’

Militarily, Abu Risha recommends giving Afghan leaders ‘the flexibility to develop and build military forces’ similar to the Awakening and Sons of Iraq militias in Iraq. (The Sons of Iraq program, initiated and paid for by the U.S. military, consisted of the formation of paramilitary organizations in an effort to spread the Awakening beyond Anbar.)

‘The international effort to stabilize Afghanistan and protect it from coercive revolution by the Taliban still enjoys broad support from a pragmatic and resilient Afghan population. Nor does the project of an adequately intact, if weak and decentralized, Afghan state, require the imposition of Western imagination.’

So what if we leave Afghanistan before the country is stabilized? Again, Steve Coll from Foreign Policy magazine:

Against this backdrop, a Taliban insurgency that increasingly destabilizes both Afghanistan and the border region with Pakistan would make such regional normalization very difficult, if not impossible, in the foreseeable future. Among other things, it would reinforce the sense of siege and encirclement that has shaped the Pakistan Army’s self-defeating policies of support for Islamist militias that provide, along with a nuclear deterrent, asymmetrical balance against a (perceived) hegemonic India.

Conversely, a reasonably stable Afghan state supported by the international community, increasingly defended by its own Army, and no longer under threat of coercive revolution by the Taliban could create conditions for Pakistan’s government to negotiate and participate in political arrangements in Afghanistan and the Central Asian region that would address Pakistan’s legitimate security needs, break the Army’s dominating mindset of encirclement, and advance the country’s economic interests.

What most Americans probably don’t know about Pakistan is the death toll from terrorist attacks during recent years – it “has been rising rapidly.”

“This year, the number of fatalities reached 8,375, up from 189 in 2003, according to the South Asia Terrorism Portal that tracks such figures from public records. Some 22,110 people were killed over the past six years, including at least 2,637 security personnel, 7,004 civilians and 5,960 terrorists or insurgents.”

That is why the public there is war weary, and religious extremism is losing popularity.

Two more notes from Steve Coll’s article. First, the myth that the United States was loved by the world until the presidency of George W. Bush:

Hard as it may be to recall, the United States’ problems with the world — or, rather, the world’s problems with the United States — started before George W. Bush took office. French Foreign Minister Hubert Védrine complained about the ‘hyperpower’ in 1998. In 1999, Samuel Huntington argued in these pages that much of the world saw the Unites States as a ‘rogue superpower,’ ‘intrusive, interventionist, exploitative, unilateralist, hegemonic, hypocritical.’

Here is some good news about the latter part of “W’s” term in office that still doesn’t get a lot of attention in the press:

[D]espite the negative opinion polls, most of the world’s great powers are drawing closer to the United States geopolitically. A few years ago, France’s Jacques Chirac and Germany’s Gerhard Schröder flirted with turning to Russia as a way of counterbalancing U.S. power. But now, France, Germany, and the rest of Europe are tending in the other direction. This is not out of a renewed affection for the United States. The more pro-U.S. foreign policies of French President Nicolas Sarkozy and German Chancellor Angela Merkel reflect their judgment that close but not uncritical relations with the United States enhance European power and influence. The eastern European nations, meanwhile, worry about a resurgent Russia.