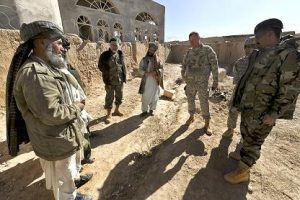 Many of us will be voting for a congressional and a U.S. Senate candidate in the Republican primary in just a few months, and one of the pressing issues our representatives will be dealing with is what to do in Afghanistan.

This issue is actually like any other issue. It’s the responsibility of our leaders to thoroughly understand what’s at stake – the problem, its cause, and the foundation for the genuine solution.

So why are we fighting in Afghanistan – what is our national security interest there?

I’ll let President Barack Obama answer the first question – here is what he told the Veterans of Foreign Wars back in August:

This is not a war of choice. This is a war of necessity. Those who attacked America on 9-11 are plotting to do so again. If left unchecked, the Taliban insurgency will mean an even larger safe haven from which al-Qaida would plot to kill more Americans. So this is not only a war worth fighting. This is fundamental to the defense of our people.

That’s not a welcome statement to the isolationist political left and the-sky-will-fall-if-we-fight-in-Afghanistan political right. Those two groups disagree with the President that Afghanistan is a war of necessity.

Michael Gerson, former senior policy advisor to President George W. Bush, wrote this summation of the divide on Afghanistan back in September:

On the right, some who accepted the Cold War as a great moral cause view the war on terror as a bother — even as a dangerous excuse for global social engineering. Such tinkering, the argument goes, is particularly doomed in Afghanistan, brimming with warlords both primitive and invincible.

And because Afghanistan is now Barack Obama’s war, no partisan motive remains to support it.

Some people never thought we should have gone there in the first place, while others think the threat posed by terrorists on foreign soil is waning. Many people are tempted to think the danger has passed. The country hasn’t been attacked since 9-11-01, aside from the recent Fort Hood act of terrorism.

Is there a threat – or have those who have voiced their intention to do us harm decided to move onto other things? I don’t agree with Obama on much, but I do agree with his statement above.

The question of the threat today is no different than when wrote two years ago concerning Iraq. I’d refer you to my affirmative answer in that piece to the question “is there a threat?”

The strategic importance of Afghanistan is difficult for critics of the war to deny. The events of 9/11, which began in state-sponsored terror academies there, are not yet generally regarded as a myth. The spread of Taliban safe havens in Afghanistan would permit al-Qaeda to return to its historical operating areas. This would allow, according to one administration official to whom I spoke, ‘perhaps a hundredfold expansion of their geographic and demographic area of operation.’ And Taliban advances in Afghanistan could push a fragile, nuclear Pakistan toward chaos.

After the rapid over-throw of the Taliban led government in 2001, the Afghan front became “largely inactive for years” according to Victor Davis Hanson. Hanson used the numbers to prove his point:

In 2008 that front flared up as al Qaeda had regrouped and began to take back ground. Some people don’t think that’s a problem, and that we should pull out of Afghanistan.

In the Canadian news magazine Macleans earlier this month, Andrew Coyne and Paul Wells asked if it mattered whether the U.S. withdrew/surrendered:

It matters, certainly, to the Afghans, whom we would have abandoned to the Taliban a second time. But it matters to the security of the West, as well. Yes, al-Qaeda is a worldwide organization, but there’s a reason why its leadership was based in Afghanistan at the time of 9/11, and why it continues to lurk just across the border in Pakistan. According to intelligence reports, the Taliban, especially its Haqqani faction, remain intimately connected with al-Qaeda, with Taliban opium providing an important source of funds.

Besides, you can’t look at Afghanistan in isolation. Pakistan, with its vulnerable nuclear arsenal, is arguably the gravest security threat in the world today. How much more emboldened will its own insurgents be if the Taliban triumph in Afghanistan? Or never mind Pakistan: how much of a boost would a Western defeat in Afghanistan provide to jihadists around the world? There is no more potent recruiting slogan than ‘we’re winning.’

They go on to address the plan that Generals Stanley McChrystal and David Petraeus support pursuing in Afghanistan (more on that later):

That dynamic works in reverse, too. A ‘hearts and minds’ strategy in Afghanistan may in part be about democracy and development, but it’s mostly about the understandable desire of tribal leaders to line up with the winning side. Show resolve now, and they may fall our way; secure Afghanistan, and Pakistan will have less fear of going after its own Taliban…

But we are implicated in Afghanistan whatever we do: if we stay, and if we go. Part of that wretched nation’s plight is owing to the West’s failure to follow through after the Soviets were driven out.

The United States has two compelling interests at issue in the Afghan conflict.

One is the ongoing, increasingly successful but incomplete effort to reduce the threat posed by al Qaeda and related jihadi groups, and to finally eliminate the al Qaeda leadership that carried out the Sept. 11 attacks.

The second is the pursuit of a South and Central Asian region that is at least stable enough to ensure that Pakistan does not fail completely as a state or fall into the hands of Islamic extremists.

More than that may well be achievable. In my view, most current American commentary underestimates the potential for transformational changes in South Asia over the next decade or two, spurred by economic progress and integration.

But there is no question that the immediate policy choices facing the United States in Afghanistan are very difficult. All of the courses of action now under consideration by the Obama administration and members of Congress carry with them risk and uncertainty.

To protect the security of the American people and the interests of the United States and its allies, we should persist with the difficult effort to stabilize Afghanistan and reverse the Taliban’s momentum. This will probably require additional troops for a period of several years, until Afghan forces can play the leading role.