Millions of Americans watch the Super Bowl every winter not just for great football, but to vote for the best halftime commercials. The SB ad spots are pricey, about $5 million for 30 second ads, some of which are clever and hilarious, some touching, and a few offensive.

The big question is, how many, if any, of these stratospheric-priced ad and marketing agencies work as copywriters for Barack Obama and Mainstream media?

The latest, horrific example being coverage of the Islamic terrorist who shot and killed 49 people and wounded 53 others early Sunday at the Pulse gay nightclub in Orlando, Florida.

I was deeply grieved when I learned of the shootings: no matter the victims, they were people who did not deserve to be viciously murdered. Of course I have a worldview conflict with those revelers at the Pulse, known as “The” hottest, homosexual club in the area. But contrary to the beliefs of The Secular Left and the LGBTQ crowd, disagreement does NOT mean hatred.

And let’s be completely clear: Evangelicals such as myself love and pray for ALL people, while we personally espouse and revere biblical values. Those who follow Jesus, follow His Word. We cannot expect those who do not follow Jesus to adhere to the Bible.

I watched Sunday as the President held a quickly assembled presser to address the egregious attack, the worst shooting in U.S. history.

The President started his statement ably, with perfectly fine verbiage:

Today, as Americans, we grieve the brutal murder — a horrific massacre — of dozens of innocent people. We pray for their families, who are grasping for answers with broken hearts. We stand with the people of Orlando, who have endured a terrible attack on their city. Although it’s still early in the investigation, we know enough to say that this was an act of terror and an act of hate. And as Americans, we are united in grief, in outrage, and in resolve to defend our people.

Then, a few grafs later the President made his social commentary:

This is an especially heartbreaking day for all our friends — our fellow Americans — who are lesbian, gay, bisexual or transgender.

President Obama has been touting the glories of June as “Lesbian, Gay, Bisexual, Transgender Month” and now must offer heartfelt condolences as that small subset of Americans is targeted by another of his pet groups, Muslims. How can he reconcile this act of terror?

Notice something missing from his description:

The FBI is appropriately investigating this as an act of terrorism. And I’ve directed that we must spare no effort to determine what — if any — inspiration or association this killer may have had with terrorist groups. What is clear is that he was a person filled with hatred.

Nary a mention of Islamic Terrorism. No sirree. That would be insensitive.

But what really struck me was Obama’s carefully selected words as he painted a picture of the Pulse gay nightclub as not a homosexual bar, but more of clubhouse for the downtrodden to meet and sing and lift each other up. He could have been describing an inner city Rescue Mission, the YMCA, or even The Mouseketeer Club.

The shooter targeted a nightclub where people came together to be with friends, to dance and to sing, and to live. The place where they were attacked is more than a nightclub — it is a place of solidarity and empowerment where people have come together to raise awareness, to speak their minds, and to advocate for their civil rights.

That right there is marketing at it’s very best. I in no way desire to lessen the absolute evil that wantonly took those precious lives. The shooting was immoral; it was absolutely abhorrent.

But to describe a homosexual bar as a place “…where people came together to be with friends, to dance and to sing, and to live…a place of solidarity and empowerment where people have come together to raise awareness, to speak their minds, and to advocate for their civil rights”?

In your wildest dreams do you believe Obama would describe a cowboy bar in Montana in such glowing terms? Perhaps recounting “It was a meeting place, a watering hole, where rugged individualists, living out their Second Amendment rights would congregate, partake in refreshments, dance, and uplift one another in the spirit of Patriotism!” Nope. Never.

And not to miss a beat while marketing his Secular Progressive, Constitution-attacking worldview, Obama seized his anti- Second Amendment moment:

Today marks the most deadly shooting in American history. The shooter was apparently armed with a handgun and a powerful assault rifle. This massacre is therefore a further reminder of how easy it is for someone to get their hands on a weapon that lets them shoot people in a school, or in a house of worship, or a movie theater, or in a nightclub.

Let’s debunk that once again. Sorry Mister President, it is an Armalite 15 Semi Auto Rifle — NOT a “powerful assault rifle.” And the rifle or handgun used is NOT the point: those are only tools and can be used for good or evil depending on the heart and ideology of the shooter.

This particular shooter, whose name I purposely omit so as to not foster “acclaim” for the depraved perp, espoused radical, Islamic ideology which calls for the conversion or killing of Christians and the murder of homosexuals. Period. 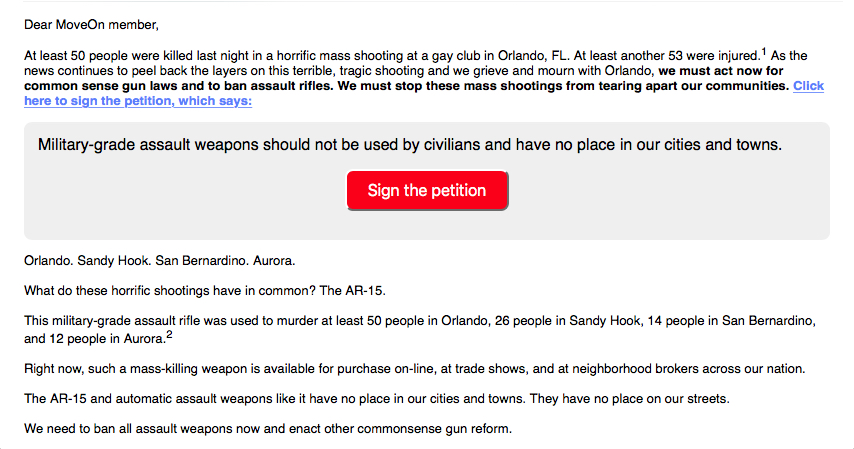 Anyone not fully informed by truth, or rather brainwashed by the Second Amendment-loathing Left, will read such fund-raising ploys with alarm! Lefty organizations and media employ terms such as “military-grade assault rifle” and “mass-killing weapon” and “automatic assault weapons” to elicit panic and fear. We must ban these brutish weapons!

Fact: the AR-15 Semi-Automatic rifle is not any more an assault weapon than a Henckels steak knife. (apologies to J.A. Henckels which manufactures exceptionally fine knives and cutlery). As I wrote in this 2014 article, Armalite (Not Assault) Rifle 15 and the Second Amendment:

But, at it’s heart, what is an AR-15? A rifle. A semi-automatic rifle — nothing more, nothing less.

So when you hear someone at the grocery store say, “I just don’t think anyone needs to own assault weapons,” remind them that the AR-15 is a semi-auto rifle, NOT an ASSAULT weapon.

Remind them that restrictions on firearms only affect the law-abiding, legal U.S. citizen who obeys the laws of the land, not the criminal who would seek to do them and theirs harm.

Thus, in one supposedly empathetic and innocuous presser, Barack Obama and his clever writing team managed to canonize Pulse and those assembled there, and to demonize the much maligned AR-15 rifle.

This is what The Left does: they use every single event, both good or horrific, to advance and market their agenda.

How should Conservatives, and especially those who are Christians, respond to this mass shooting?

But we should also, every one of us, become apologists for a conservative, biblical worldview that affirms life.

We must tell the truth: Islam is a false religion that is luring people to an eternity separated from God. And Islam metastasizes, when the Quran and the Hadiths are strictly followed, into a virulent ideology straight from hell, calling for brutal slaying of non-believers. Islam is wholly incompatible with the Christian precepts of our founding documents. Sorry Obama. That is the truth.

If Obama and The Left can market such heinous ideologies and lies so splendidly, why can’t The Right — Conservatives, Christians — market transcendent, life-affirming and life-giving truth more splendidly?

We are called to be salt and light, and should we not do so, we are shirking our God-given admonishment.

In the words of the Apostle Paul: “Do not be overcome by evil, but overcome evil with good.”

First posted at Saving Our Future.