All the issues are the same. Every single one of them. Economics. Foreign policy. Homeland security. Immigration. Health care policy. Education. Social Security and the rest of the entitlement programs. Energy policy. Abortion. Marriage and the family. They’re not the same in importance, of course, but they are all equal when it comes to the fundamentals regarding which view prevails in the information war.

The side that connects with and persuades more people wins.

The information war is the war conservatives have been losing for many decades. Why? Because they’re not adequately fighting it.

How can I say that? After all, conservatives own talk radio, are increasing their presence on the Web and social media, and can claim (in part anyway), dominance of the highest rated TV cable news channel.

It’s easy for me to say it. The radical political left has the big guns — the societal institutions which exist to convey information to the public at large. The kindergarten through college schools. Pop culture — magazines, television, movies, and music. The old but still dominant media (print, radio, and TV). And yes, even the new media that dominates — Yahoo News, AOL News, and Google News. Need I mention that Facebook is also radically left?

It’s all about numbers. The side that reaches and wins over more people prevails.

For years I have written on the topic — the need for conservatives, and yes, the Republican Party, to enter the information war in earnest. The thinking that our fantastic think tanks, news and commentary websites, talk radio, and what’s still worthwhile over at Fox News are getting the job done is delusional. This idea that “broadcasting” or posting will suffice is foolishness.

It’s time to get aggressive when it comes to marketing. Million dollar ad buys are necessary. (Oh, and to you Poverty Gospel Christians, it’s time to wake up to reality: everything costs money, including The Great Commission.)

We must do everything that it takes to reach the uninformed and misinformed. “Post it and they will come” is a recipe for continued failure.

Allow me to invite you to visit Dispatches University (“The Best Archive on the Web,”) as well as the articles which lay out in an elementary school-like way my argument on the political right’s massive, decades-long failure in the information war. Our side produces so much amazing material on every issue under the sun. Daily. Weekly. Monthly. Unfortunately, most of it only reaches the choir (those who are already on our side).

This past Saturday, BarbWire.com’s Tami Jackson posted a great article that contained numerous pictures that set the standard. What do I mean? The people gathered in Oregon to let Obama know that they’re too well-informed to fall for his lies — these people define the type we need more of: Americans who understand and revere the U.S. Constitution and are willing to act in its defense. 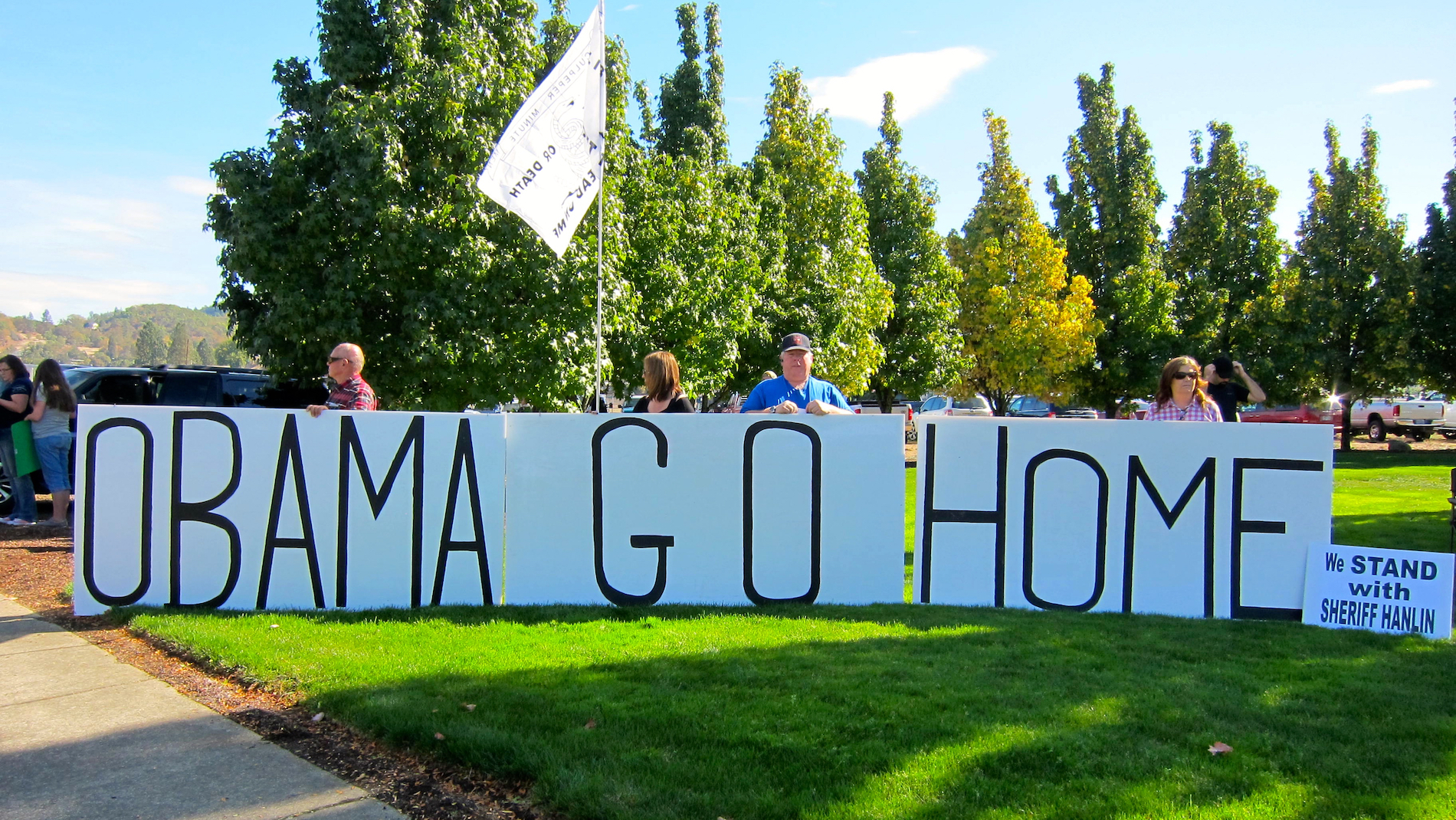 New citizens are required to swear an oath to “support and defend the Constitution and laws of the United States of America against all enemies, foreign and domestic…” And “that I will bear true faith and allegiance to the same…”

We need more natural born citizens to do the same.  I remain convinced that if more people will, if conservatives will connect with more of their fellow citizens (printed words to eyes, spoken words to ears) — then we will be able to save the country from the fundamental transformers.

There are so many examples to cite where the old media failed to report the facts. Tami Jackson’s article perfectly illustrated one example where a substantive interview was pared down to nothingness through the editing process. Not to mention the larger old media’s paltry coverage of what took place on the ground in Oregon. 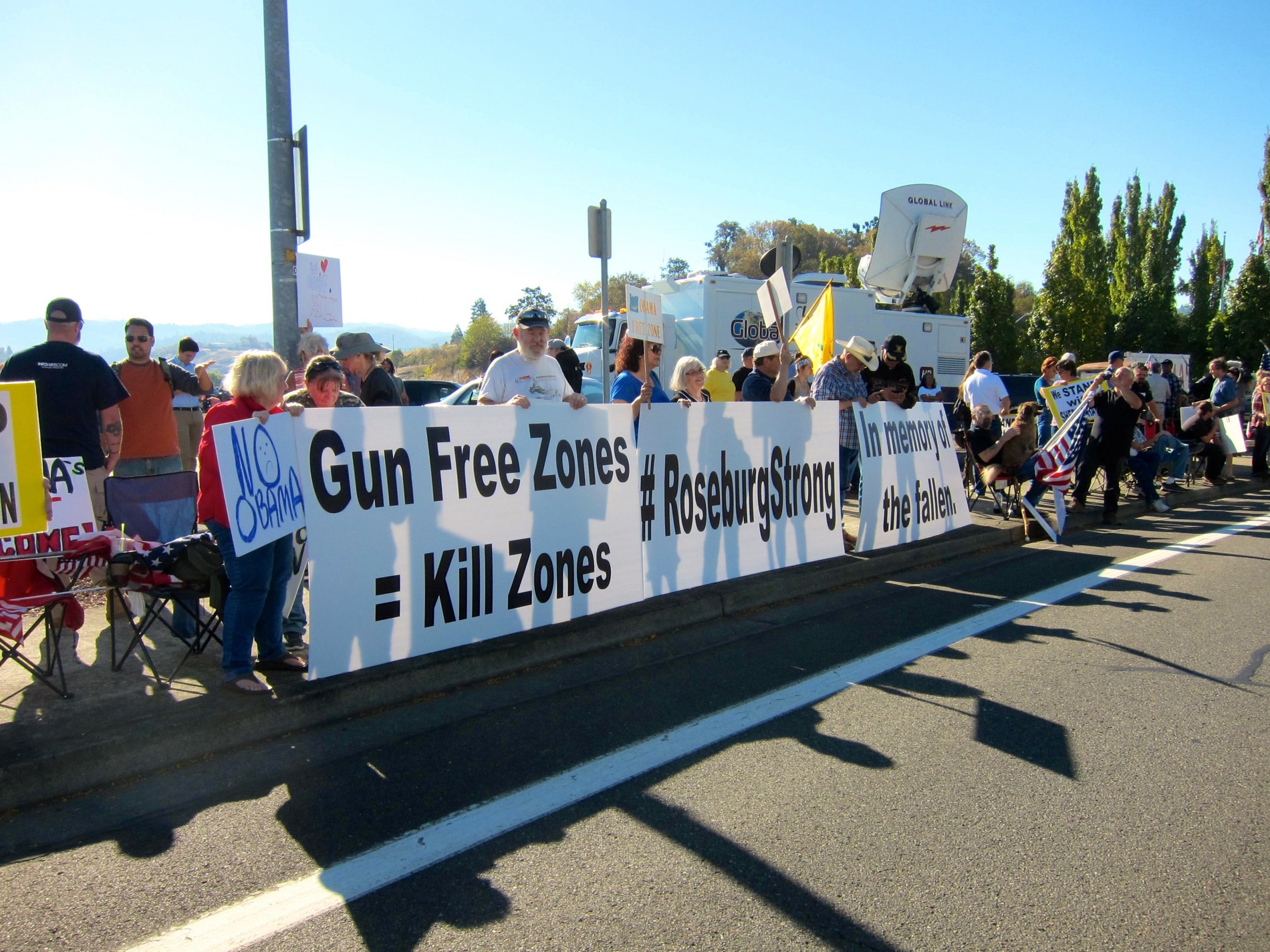 Within her post Tami Jackson posted one short clip the local media did run, and then she laid out more of what was left out the clip:

What I actually said?

Emily: What is the purpose of this Roseburg event?

My answer: We are Oregonians, patriots who love America and her Constitution. We disagree vehemently with the President’s policies and actions and we are outraged that he would dare to visit when the community made it clear he was not wanted here.

Emily: What would you have done if you had been carrying and at Umpqua Community College that day?

My answer: Without hesitation I would have stopped the threat.

Emily: What would you say to those who might believe you’re being disrespectful to a sitting president?

My answer: That’s nonsense. We wish him no harm. We just believe that when someone puts their hand on the Bible and swears to protect our Constitution against all enemies foreign and domestic, and then with every action appears to be said domestic enemy of the Constitution, we want that person out of the White House. We want someone in the oval office who has the same love of country and allegiance to the Constitution that we all have. Period.

Emily: What was the point of your being armed today?

My answer: Casey asked any and all who do carry, to please carry as a show of Second Amendment solidarity. You might notice that this is an In the Waistband holster, intended for concealed carry, but I tucked my t-shirt in today so it would be evident I was packing.

Emily: What would you say to those who believe that all of you are doing just what you’ve accused President Obama of doing — politicizing a tragedy?

My answer: We are all standing with the people of Roseburg. They are in our continued thoughts and prayers and our outrage is due to Obama suggesting this should be politicized for more aggressive gun control and gun registration laws.

That was most of the questions that I remember, none of which made Emily’s “highly edited” footage that focused on gun violence, with the parting shot being 2 lone Obama supporters in full biking regalia and helmets, holding an “I support Obama” sign and judging the hundreds of other attendees to be very disrespectful.

This wasn’t Tami Jackson’s first post on the topic — you can read her other one here.

Conservatives on the web have the debate over the Second Amendment covered well — but their arguments only impact the mind of the public sporatically.

Cause of Violence: Guns or Family Breakdown?

Legislatures should be security-free, gun-free zones like college campuses

The Massive Ignorance Behind The Guns Cause Crime Agenda

The Illogic of ‘Gun free’ Zones

Gun Control and the Progressive Concept of Human Nature