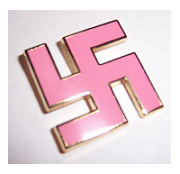 Here is an excellent post from Scott Lively. I read his amazing book “The Pink Swastika” last year and will write up a review of it soon. Here’s Lively:

I once asked a journalist, who was doing a story about my listing as a “hate group” by the Southern Poverty Law Center, to ask SPLC what I would take for them to de-list me. SPLC replied to him that I would have to recant my book, The Pink Swastika: Homosexuality in the Nazi Party (co-authored with Orthodox Jewish researcher Kevin E. Abrams). I will never recant The Pink Swastika because it is the truth, so I guess I’m a SPLC “lifer.”

The SPLC knows that the most dangerous aspect of my 25-year Christian ministry to stop the LGBT political agenda is the truth contained in the pages of this book. That militant agenda rests on a foundation of sand: i.e. the premise that homosexuals are victims of society who can only escape persecution and eventual extermination by expunging all disapproval of their sexual perversion from public life. The bottom-most layer of that foundation is the claim that homosexuals were victims of the Nazi Holocaust.

In 1995 Kevin and I published the first edition of The Pink Swastika to counter historical revisionism by the homosexual political movement, which had been attempting since the 1970s to fabricate a “Gay Holocaust” equivalent to that suffered by the Jews in Nazi Germany. In those days the primary symbol of the homosexual movement was the inverted pink triangle, which designated homosexuals in Nazi work camps.

Yes, some effeminate homosexual men aligned with the German Communist Party were in fact persecuted by the masculine/macho homosexual men of the fascist Nazi Party, but it was a relatively small number and they were never targeted for extermination like the Jews. The far bigger story is the widespread homosexuality among the perpetrators.

Solely for making this assertion — and proving it with 400 pages of documentation on the centrality of homosexuality to the Nazi movement — the SPLC has also labeled me a “Holocaust Revisionist,” a nasty lie which is close to the top of the list of “100 Reasons to Hate Scott Lively” that is today posted on the refrigerators of every leftist journalist and political activist on the planet (a slight exaggeration, perhaps).