Editor’s note: Count me among those who won’t be surprised when the “never-Trumpers” find ways to bash President Trump’s first budget — probably the best we’ve seen in decades when it comes to actually cutting spending.

THE BUDGET MESSAGE OF THE PRESIDENT
To The Congress of The United States:

On February 28, I spoke to a joint session of the Congress about what we need to do to begin a new chapter of American Greatness. I asked the Nation to look forward nine years and imagine the wonders we could achieve by America’s 250th anniversary of our Independence if we set free the dreams of our people by removing the barriers holding back our economic growth.

This Budget’s defining ambition is to unleash the dreams of the American people. This requires
laying a new foundation for American Greatness.

Through streamlined Government, we will drive an economic boom that raises incomes and expands job opportunities for all Americans. Faster economic growth, coupled with fiscal restraint, will enable us to fully fund our national priorities, balance our budget, and start to pay down our national debt.

Our moral commitment to replacing our current economic stagnation with faster economic growth rests on the following eight pillars of reform:

Health Reform. We need to enable Americans to buy the healthcare they need at a price they can afford. To this end, we must repeal Obamacare and its burdensome regulations and mandates, and replace it with a framework that restores choice and competition. This will lower the cost of care so that more Americans can get the medical attention they need. Additionally, Medicaid, which inadequately serves enrollees and taxpayers, must be reformed to allow States to manage their own programs, with continued financial support from the Federal Government.

Tax Reform and Simplification. We must reduce the tax burden on American workers and businesses, so that we can maximize incomes and economic growth. We must also simplify our tax system, so that individuals and businesses do not waste countless hours and resources simply paying their taxes.

Immigration Reform. We must reform immigration policy so that it serves our national interest. We will adopt commonsense proposals that protect American workers, reduce burdens on taxpayers and public resources, and focus Federal funds on underserved and disadvantaged citizens.

Regulatory Rollback. We must eliminate every outdated, unnecessary, or ineffective Federal regulation, and move aggressively to build regulatory frameworks that stimulate—rather than stagnate—job creation. Even for those regulations we must leave in place, we must strike every provision that is counterproductive, ineffective, or outdated.

American Energy Development. We must increase development of America’s energy resources, strengthening our national security, lowering the price of electricity and transportation fuels, and driving down the cost of consumer goods so that every American individual and business has more money to save and invest. A consistent, long-term supply of lower-cost American energy brings with it a much larger economy, more jobs, and greater security for the American people.

Welfare Reform. We must reform our welfare system so that it does not discourage able-bodied adults from working, which takes away scarce resources from those in real need. Work must be the center of our social policy.

Education Reform. We need to return decisions regarding education back to the State and local levels, while advancing opportunities for parents and students to choose, from all available options, the school that best fits their needs to learn and succeed. 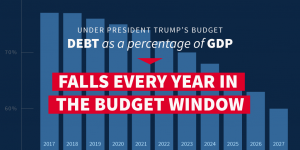 To unleash the power of American work and creativity—and drive opportunity and faster economic growth—we must reprioritize Federal spending so that it advances the safety and security of the American people.

This Budget, therefore, includes $639 billion for the Department of Defense—a $52 billion increase from the 2017 annualized continuing resolution level. This increase will be offset by targeted reductions elsewhere. This defense funding is vital to rebuilding, modernizing, and preparing our Armed Forces for the future so that our military remains the world’s preeminent fighting force and we can continue to ensure peace through strength. This Budget also increases funding to take care of our great veterans, who have served their country with such honor and distinction.

In these dangerous times, our increased attention to public safety and national security sends a clear message to the world—a message of American strength and resolve. It follows through on my promise to focus on keeping Americans safe, keeping terrorists out of our Nation, and putting violent offenders behind bars.

As this Budget returns us to economic prosperity, it will also allow us to fund additional priorities, including infrastructure, student loan reform, and initiatives to help working families such as paid parental leave. We will champion the hardworking taxpayers who have been ignored for too long. Once we end our economic stagnation and return to robust growth, so many of our aspirations will be within reach.

It is now up to the Congress to act. I pledge my full cooperation in ending the economic malaise that has, for too long, crippled the dreams of our people. The time for small thinking is over. As we look forward to our 250th year, I am calling upon all Members of Congress to join me in striving to do big and bold and daring things for our Nation. We have it in our power to set free the dreams of our people. Let us begin.