Editor’s note re this reprinting of an email from Project Veritas: The group’s recent report about Google’s censorship of conservatives is important, and much has been written on the topic. Coming soon on Dispatches will a page featuring many of the articles and videos about this continuing serious issue.

Here is their recent email which is posted here for anyone who missed it and would like to help fund their efforts.

Last week’s Google investigation broke records for Project Veritas!  It was the most visible story in our history.  But what truly astounded me, was how many members of Congress commented.  It’s incredible.

Here are some of my favorite examples:

Senator Gary Peters – D, MI
Senator Peters responded to the story during an interview on the Sinclair television network, saying, “I think it’s clear that these platforms are trying to persuade folks, trying to make sure through their business model.”

Senator Rick Scott – R, FL
Senator Scott responded to the story during an interview on the Sinclair television network, saying, “They’ve got to prove that they’re not, I think they have to convince all of us that they’re doing the right thing and there’s a process to make sure they’re not biased.”

Representative Debbie Lesko – R, AZ
“In this Project Veritas video, which I did watch last night, they allege that there are internal Google documents which they put on the video, and this is what it said, ‘for example, imagine that a Google image query for ‘CEOs’ shows predominately men. . . ”

“If we don’t share the value of free speech, I’m not sure where we go from here. This practice of silencing millions and millions of people, it will create wounds and divisions in this country that we cannot heal from. This is extremely worrisome . . . if we continue down this path, it will tear us apart.”

Representative Louie Gohmert – R, TX
“This video shows Google’s biases are now a threat to a free and fair election . . .  Google references a significant role they see themselves fulfilling in the 2020 elections. This discovery should set off alarm bells throughout the country . . .”

Representative Warren Davidson – R, OH
“If Big Tech would coordinate to filter content, would they (or similar entities) work together to filter financial transactions? Either way, coordination would violate federal antitrust laws. And, platforms (which they claim to be) are regulated differently than publishers…” 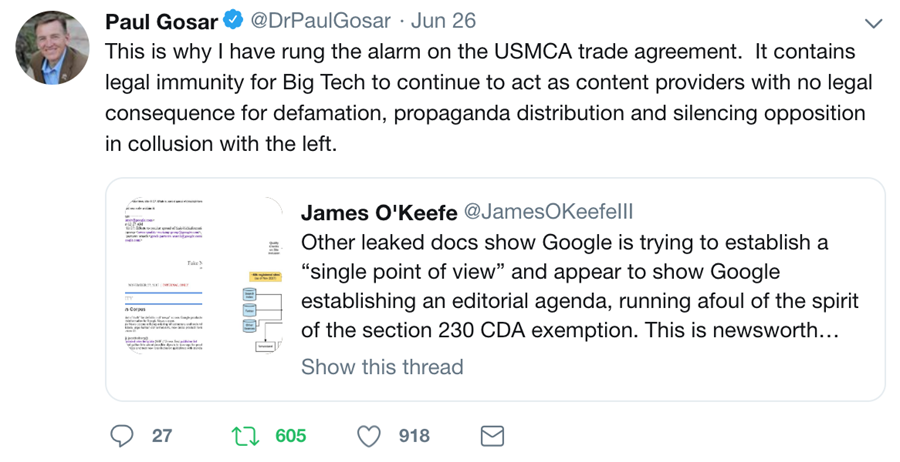 Representative Clay Higgins – R, LA
“YouTube removed a video from Project Veritas which appears to show senior Google executive acknowledging politically motivated search manipulation with an intent to influence election outcomes. None of us here want that, on either side of the aisle . . . we’ll stand for freedom, including against Google.”

It’s truly amazing how impactful our Google investigation has been so far.

The last time I saw a Veritas investigation with this much impact . . . it was our ACORN videos . . . and ACORN was then defunded under former President Barack Obama.

So what will happen now?  Will Congress take the required actions against the practices and bias of Google?

You and I will have to wait and see.  But it appears President Trump is already making plans to act . . .

Stay tuned and Be Brave!

Mamaroneck, NY 10543Project Veritas Is Recognized As a Tax Exempt Organization Under Section 501(C)(3) of the Internal Revenue Code. Your Donations Are Tax Deductible As Allowed by Federal Law and the Laws of Various States.