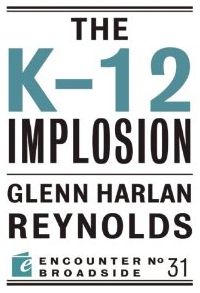 Tomorrow we celebrate a new year and I can’t think of a better article to link to on the last day of 2012 than this one by Glenn Harlan Reynolds. He is a law professor at the University of Tennessee. His “The K-12 Implosion” will be published by Encounter Books next month.

[T]he larger question of whether it makes sense to warehouse a bunch of kids together, sorted by age, remains. Is it time to rethink traditional public schools?

Many think so. As The New York Times recently noted, parents are pulling their kids out of many large urban districts in favor of private, on-line and charter schools. This is causing financial problems as the lower enrollments lead to teacher layoffs and general shrinkage.

Why are the parents pulling their kids? Because they think the public schools aren’t as good as the alternatives.