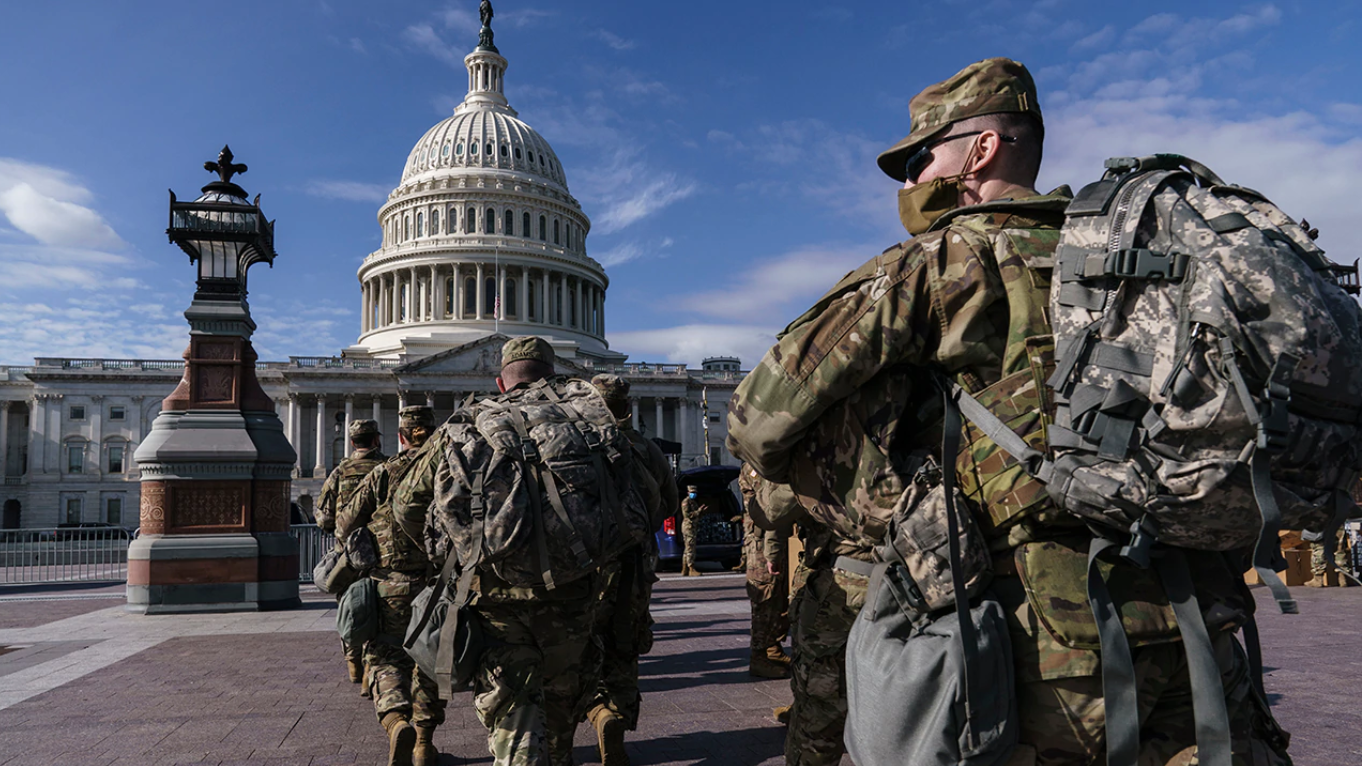 A leaked email from the Pentagon’s acting point person on Homeland Security written on Jan 20 raised alarm bells about just how long the National Guard will remain guarding the Capitol, an expensive mission with no clear end date which has Republican lawmakers asking for answers.

There remain 6000 National Guard protecting the Capitol, according to Maj Matt Murphy, a National Guard spokesperson. They are scheduled to support federal agencies through mid-March.

An e-mail obtained by the Fox affiliate in Washington DC, suggests the Pentagon is planning for a possible longer deployment. Robert Salesses, who began Performing the Duties of the Assistant Secretary of Defense for Homeland Defense and Global Security on January 20, 2021, wrote in the e-mail:

“If it’s not possible to sustain at the current level with NG personnel, we need to establish the number of NG personnel (DCNG and out-of-state) we can sustain for an extended period – at least through Fall 2021 – and understand additional options for providing DoD support, to include use of reserve personnel, as well as active component.”

“The National Guard is conducting prudent planning for the eventual end of the security mission and the return of its Soldiers and Airmen to their home stations.”

Pentagon officials say no decisions have been made and that Defense Secretary Lloyd Austin would like to return the National Guard home as soon as possible.

Senior US officials tell Fox News the White House wants to discuss the end of the National Guard requirement, not the extension of it.

Regarding the Jan 20 email, officials say, “A lot has settled down since Jan 20” regarding the threat assessment. Civilian intelligence agencies have said repeatedly there is “no credible or direct threat” that they can point to when asked about the intelligence that has led to the extension of the National Guard mission through mid-March.

The National Guard remains in DC at the request of the Capitol Hill Police. A security meeting involving federal law enforcement agencies is slated for Wednesday.

JASON CHAFFETZ: SPEAKER PELOSI, WHEN WILL YOU ANSWER THESE 13 SECURITY QUESTIONS?

Meantime four Republican lawmakers are demanding answers from House Speaker Nancy Pelosi on what she knew in regards to the Capitol’s security on January 6th.

The Guard mission at the Capitol is slated to cost 483 million dollars through March, according to the Pentagon.

The letter signed by Congressmen Devin Nunes, Jim Jordan, James Comer and Rodney Davis is addressed to Pelosi writes in part to “end this political charade, and work with us to protect the capitol and those who work here every day.”

Pelosi’s deputy chief of staff Drew Hammill responded in a statement to Fox: “Clearly, the security of our Capitol and democracy are not the priorities of these Ranking Members…With this transparently partisan attempt to lay blame on the Speaker, who was a target of assassination during the insurrection fueled by the lies of House Republicans, the Ranking Members are trying to absolve former Police Chief Sund, former Sergeant at Arms Stenger and the leader who appointed him, Mitch McConnell, of any responsibility.  We look forward to these Ranking Members asking these same questions of former Senate Majority Leader Mitch McConnell.”

Late this afternoon Speaker Pelosi said Congress will establish an independent, 9-11-style Commission to look into the Capitol riot.

Republican lawmakers are requesting a briefing.

“The only briefings that we’ve had is through the media, really, that the troops may be staying there through the fall, which is extremely concerning because myself and several of my colleagues have asked Nancy Pelosi for a briefing as to why do we need these troops here. And we have received zero information. Zero,” Cong Lisa McClain (R-MI) said on Fox and Friends.

“I cannot say how long parts of the city that we use to will be closed off but we certainly are going to see to it that it is not permanent.”