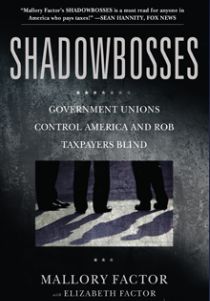 History shows that when government loses its connection with the people, the people soon become the servants of the government. SHADOWBOSSES shows how government unions are driving us down the road to serfdom, increasing the role of government in our lives, and putting into place an endless, expensive bureaucracy that will be difficult to dismantle. By explaining the complex problem of government unions in plain and simple terms, Factor shows us how these unions and their political supporters are endangering America and what we must do to restore faith in our republic. Buy this important book now.

Here are comments from the Amazon.com page:

“…Mallory Factor blows the lid off Big Labor’s racket and arms you with the whole truth about the ruthless left-wing fat cats who pull the Democratic Party’s strings…Get the facts. Buy this book.”

“…Government union bosses have been siphoning off our tax dollars by the billions for years. Mallory Factor exposes them…with a hard-hitting, thoroughly documented, and enlightening exposé of these shadowbosses and their Big Labor empire.”

“I’ve been called the top confidence man of the last century, but the stuff I pulled is nothing in comparison to what the government employee unions have pulled on the taxpayers. In SHADOWBOSSES, find out about the greatest scam in American governmental history that is costing every taxpayer a fortune.”

~ Frank W. Abagnale, Author and Subject of Catch Me If You Can

“The greatest threat to limited government and individual liberty today is the threat posed by the huge government employee unions…In SHADOWBOSSES, Mallory Factor has written a compelling and alarming account of the growing power of these radical leviathans…”

“Mallory Factor’s SHADOWBOSSES puts the torch to the political keg of dynamite beneath the Democratic Party. By exposing the government workers unions, Factor has ripped the lid off the greatest single scam in American political history…No more important book has ever been written for the American taxpayer.”