Here are headlines on what has been going on in socialist Venezuela — and I will keep added to this list so ignore the date of this posting:

In a United Nations Report, a Socialist Details Venezuela’s Horrors
Michelle Bachelet, former president of Chile, steps to the front line against the dictatorship that speaks in the name of the Left.

Venezuela: “A Mafia State”
Much of the country is also controlled by “pranes,” crime lords who run gangs from within the country’s prisons.

Socialist Venezuela now an exploding supernova of spreading infectious disease
So much for all that free health care.

How Socialism Destroyed Venezuela
Many in the media have blamed Venezuela’s worsening humanitarian crisis on corruption, mismanagement, falling oil prices, or U.S sanctions—anything but the rise of socialism in what was once the wealthiest country in South America.

Venezuela Shows What Happens When Planners Pretend Prices Don’t Matter
Whatever any government anywhere’s plans for the future, keeping the price system in place is of paramount importance.

What Life Inside Venezuela’s Crumbling Authoritarian Regime Looks Like
The citizens rely on the government for their livelihood, but they have little control over the government that supposedly represents them.

Socialism is causing Venezuela – with the world’s largest oil reserves — to run out of gasoline
It’s time for the American left to explain why the tragedy of Venezuela will not happen here if their policies are enacted.

Murderous communists? Who knew? Take a look at what they are doing in Venezuela
The Maduro regime is showing an alarming willingness to violently attack opposition leaders, and it’s moving in on high-profile ones who had previously seemed untouchable. They’ve already jailed politician Leopoldo Lopez and driven many others into exile. But the regime’s people have stepped up the thuggery to higher levels since then. They tortured to death a city councilman who was then flung off a ten-story building earlier this month. And they encircled and beat up leading opposition leader Maria Corina Machado, likely signaling intent to kill.

Venezuela: Socialism in Action
Its people are fleeing not war, famine, or natural disaster but economic mismanagement.

Watch a string of Venezuela’s power stations explode through the night
Socialism and electricity don’t seem to mix in Maracaibo, Venezuela, where a humongous string of power substation explosions occurred on Aug. 31. Nice work, socialism.

Venezuelan inflation rate now at 40,000%
A researcher at John Hopkins who has been tracking prices in Venezuela for two decades, says that the inflation rate has topped 40,000% for the first time. No, that’s not a printing error.

Socialism, Not Corruption, to Blame for Venezuela’s Oil Production Drop
Venezuela’s tragic famine and refugee crisis taking place despite the largest proven reserves of oil on the planet.

As the US bails out Venezuela’s refugees, why isn’t it condemning the horrors of socialism?
With 35,000 hungry, desperate Venezuelans pouring over the Colombian border every day now, Venezuela has morphed from a socialist nuisance state with a big-mouthed dictator into to a very real foreign aid issue.

Venezuela: Always a bad sign when your military deserts
The desertion of an army over hyperinflation doesn’t seem to have precedent for success.

Rich Venezuelan Socialists Live the High Life in Florida
While their compatriots starve back home.

The Cost of Doing Nothing About Venezuela
Few in Washington appear worried about how instability in Latin America will negatively impact the political order of the United States.

The Collapse of ‘Saudi Venezuela’
Once the region’s richest country, now a leading producer of refugees.

The Ongoing Implosion of Venezuelan Statism
Venezuela’s continuing economic collapse is a horrifying condemnation of how socialism actually works.

Iran, Russia, and China’s Central Role in the Venezuela Crisis
Prior to any discussion on what to do about Venezuela, a consensus about what led to this crisis needs to be reached.

The New York Times Left Socialism’s Role Out of Its Report on Venezuela’s Devastation
Kudos to The New York Times—yes, The New York Times—for running an excellent, detailed story on the mass starvation and economic catastrophe taking place in Venezuela. Alas, missing from the Times analysis is nearly any discussion of the reality that Venezuela is a socialist country once praised by America’s liberal elite.

Socialism is crushing and killing Venezuela’s poor
So much for socialism helping the poor.

Socialist Policy Tanked Venezuela’s Economy, Not Falling Oil Prices
Socialism is why Venezuela’s economy is so much worse than other oil-dependent nations.

How’s Socialism Doing in Venezuela?
A video from Prager University.

Venezuela’s Descent Into Chaos Buries The Left’s Hopes Of ‘Good Socialism’
Our glitterati’s favorite socialist paradise has, like so many similar experiments, become a murderous den of oppression and privation.

Venezuela’s Chaos Is the Logical End of Democrats’ Vision for America
Philosophically consistent Democrats, if given enough power for a long enough period, would likely destroy the U.S. economy in much the same way the socialists of Venezuela have.

NEVER FORGET: Leftists Gushed Over Venezuela’s Horrific Socialist Dictators
It’s worth noting that the American Left praised both Chavez and Maduro for decades as halcyons of humanitarian redistributionism.

Socialism Has Destroyed Venezuela
[I]n a country where many young people are still enchanted by the Bernie Sanders message of socialism and free stuff, not enough attention has been paid to this simple fact: that in the real world—a world where bad people say good-sounding things to voters and then proceed to steal other people’s stuff once they take office—Venezuela is what you get when socialist theories are actually put into practice.

Venezuela’s currency crumbles at dizzying speed
Venezuela’s money, the bolivar, is sinking faster and faster under an intensifying political and economic crisis that has left citizens destitute and increasingly desperate.

The Revolution Devours Venezuela
Venezuela is a woeful reminder that no country is so rich that it can’t be driven into the ground by revolutionary socialism.

A Hero, a Turncoat, and a Trojan Horse Shake Venezuela
Tragedy and farce: The people starve, the attorney general denounces the government, and a Maduro loyalist hides in the trunk of a car to sneak into the Ministry of Justice.

Everyone Wants Toilet Paper. Why Doesn’t Venezuela Have Enough?
The don’t have enough food, either.

Why Venezuela Matters
Venezuela is one of the most unreported tragedies of our time.

What Venezuela Can Teach Young Socialists
Without the free market, socialists would have no way of determining the prices of anything.

Cry for me, Venezuela
The country is a human rights disaster of poverty, corruption, misery and epic mismanagement.

Don’t Allow Lobbyist And Deceiving Voices Conceal The Truth About Venezuela
More than fifty days after mass civil disobedience began in Venezuela, more than 50 people have died at the hands of the government. 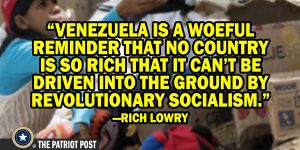 What Venezuela Can Teach Young Socialists
Without the free market, socialists would have no way of determining the prices of anything.

American media hiding socialism’s devastation of Venezuela
If you want a simple test to determine if a news source is in the fake news business, examine what it writes about Venezuela.

The Venezuelan Crisis is Due to Economic Ignorance
As the world watches with horror, the crisis in Venezuela continues.

Victims of Communism Memorial Group Tells Networks to Stop Whitewashing Crimes of Socialist Venezuela
‘This is a humanitarian disaster and socialist policies are to blame.’

Venezuela’s Socialist Hellscape, Captured in 28 Horrifying Headlines
I wonder if Bernie Sanders still thinks this is a system worth supporting?

On the brink of civil war, Venezuela’s President Maduro dismantles the remains of capitalism
The deepening economic crisis has left Venezuelans without basic necessities such as medicine and food, leaving Venezuelans sick, hungry, and desperate for change.

In Venezuela, looking more and more like civil war
Two days ago, the death toll in Venezuela’s gargantuan protests stood at three. Now it’s jumped to 20.

Venezuelan president to arm nearly half a million “militia” members
We have all of the components of an unfolding humanitarian disaster on display in Venezuela.

What Eastern Europe Can Teach Cuba and Venezuela
It appears that Venezuela is on the brink of collapse as it enters the fourth circle of statist hell.

Corrupt Venezuelan Regime Failing to Quell Humanitarian Crisis
Not too long ago, oil reserves and natural resources made Venezuela the richest country in South America.

VIDEO: Do Venezuelans Love Socialism?
American Democrats love socialism. Filmmaker Ami Horowitz spoke with a few of them before heading to Venezuela to find out how well socialism is working out for people there. The answer is, not so well.

Yes, the people of Venezuela are literally starving to death
Three quarters of the population has lost an average of nearly 20 pounds in body weight.

Venezuela Is a Ticking Time Bomb
The country’s imminent collapse will have far-reaching implications for the region.

Venezuela: From shortstops to asylum seekers
Why are they seeking asylum? It starts with a failed state, a country that does not work anymore.

Venezuelans are fleeing to Brazil for medical care, overwhelming its hospitals and morgues

Venezuela on the Brink

The Lessons We Must Learn from Venezuela’s Tragedy

Venezuelan children fainting in school because they are hungry

Venezuelans flying to U.S. to stock up on food, toilet paper

Venezuela Gov’t Doubles Down on Policies Blamed for ‘Economic Disaster’

The exodus from Venezuela

Venezuela: Socialism Transformed It from Utopia to Hell on Earth

Venezuela Builds a Wall
Once citizens taste the fruits of capitalism in freer countries, there is no turning back.

Venezuela’s inflation is set to top 1,600% next year

In Venezuela, Meat and Chicken Are Only Eaten by the Socialist Party Members

A Socialist Les Miserables in Venezuela
A mob of starving people advanced on the presidential palace chanting, “We want food”. They were met by soldiers and police dispatched by the tyrant from his lavish palace decorated opulently with a golden sun, giant rock crystal mirrors, sparkling chandeliers and towering oil portraits.

How to Create Starvation in 2016

The food riots in socialist paradise Venezuela are escalating

Causes of Venezuela’s Hyper-Inflation
Venezuela’s price inflation is and has been the highest in the world for three years.

Venezuela’s Crisis Is the Latest Example of Why Socialism Doesn’t Work
It seems the “Socialism of the 21th Century” is really no different from socialism from the past.

Socialist Self-Deception: Einstein and the USSR to Bernie Sanders and Venezuela

‘We can’t go on like this’: Shortages, economic crisis make Venezuela a nation of lines

Chile, Venezuela, and the Left’s Support of State Over Prosperity

Proof That Socialist Venezuela is a Godforsaken Hellscape Right Now

Imagine No Possessions, Imagine Venezuela
John Lennon’s ‘Imagine’ gave us a fantasy vision of socialism. Venezuela is showing us the brutal reality.

In Venezuela, Socialism Is Killing Venezuelans

Incentives Matter: Everything You Wanted to Know About the Economics of Redistribution in One Image