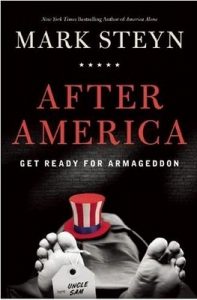 It’s summer reading list time and if you’re like me, you’re careful in selecting titles because too often the time invested seems wasted — especially when afterwards you can’t remember anything you read. One unforgettable book that’s easy for me to recommend is Mark Steyn’s After America. Somehow, he managed to top its predecessor, which we reviewed last time.

Steyn quotes the late historian Samuel Huntington: “A nation is a fragile thing.” More Americans are waking up to that fact every day. They are also waking up to what Steyn writes here:

[W]e’re not facing ‘decline.’ We’re already in it. What comes next is the ‘fall’ – fast, sudden, off the cliff, if only because the Obama spending binge made what was vague and distant explicit and immediate.

I love this quote from Steyn:

When government spends on the scale Washington’s got used to, that’s not a spending crisis, it’s a moral one.

For all those who think we can divorce the social (moral) issues from the argument for limited government, let me quote Mark Steyn: “dream on.”

Steyn writes that ‘fiscal [only] conservatives’ often miss that “this isn’t a green-eye-shade issue”:

Increasing dependency, disincentivizing self-reliance, absolving the citizenry from responsibility for their actions: the multitrillion-dollar debt catastrophe is not the problem but merely the symptom. It’s not just about balancing the books, but about balancing the most basic impulses of society. These are structural and, ultimately, moral questions.

[S]ocial liberalism always ends up burying the fiscal conservatism. As Congressman Mike Pence put it, ‘To those who say we should simply focus on fiscal issues, I say you would not be able to print enough money in a thousand years to pay for the government you would need if the traditional family collapses.’

Those familiar with my writing on the topic of conservatives’ 30+ year failure in the information war will understand why I appreciate Mark Steyn writing this:

The United States has not just a ruling class, but a ruling monoculture. Its ‘truth’ and ‘facts’ and ‘science’ permeate not just government but the culture, the media, the institutions in which we educate our children, the language of public discourse, the very societal air we breathe. That’s the problem, and just pulling the lever for a guy with an R after his name every other November isn’t going to fix it.

There are so many excellent points made within the pages of After America, but let me mention just two more things.

First, Steyn says that the presence of overly generous pensions and health care benefits for unionized government employees while so many others can’t afford to retire is “a recipe for civil war.” I couldn’t agree more. Public sector employees have been engaged in legalized theft from private sector employees for many years now and it’s only getting worse.

Second, despite Steyn’s exposition of the ugly realities of modern-day America, he writes that if we want a happy ending we’re going to have to make our own:

Liberty cannot survive if only a few are eternally vigilant. We need more people. We took our eyes off the colleges, and the high schools, and the grade schools, and these and many other institutions were coopted by forces deeply hostile to the American idea. So push back, beginning in kindergarten. Changing the culture (the schools, the churches, the movies, the TV shows) is more important than changing the politics.

An election is one Tuesday every other November. The culture is every day, every month, every year. Politicians are, for the most part, a craven, finger-pointing-in-the-windy bunch. Like Milton Friedman says, don’t wait for the right people to get elected; create the conditions whereby the wrong people are forced to do the right thing.

That’s a great deal of work. The question is, will enough Americans step up and get in the fight?