The following is an email from the Friends of Scott Walker:

As the duly elected Governor of Wisconsin I have been steadfast in my beliefs that limited government and fiscal responsibility should be the cornerstone of putting my state back on the road to prosperity. 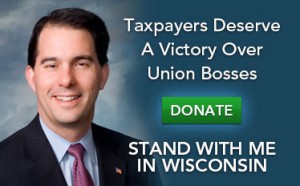 I am facing a recall by the big-government public employee unions and their minions who are threatened by the voters actually being in charge of where their tax dollars are being spent.

In November of 2010, the majority of Wisconsin voters resoundingly said enough-is-enough to the status quo and put me in charge of a state that had been beholden to big government special interests with a tax-and-spend mentality that created a $3.6 billion deficit.

In less than a year we were able to eliminate this deficit and provide the freedom of choice for public employees . Our reforms are allowing them to decide if they would like to spend more than a thousand dollars a year in union dues or keep their money. We put a stop to the unions’ railroading of the taxpayers’ hard-earned dollars.

What we need now is your help in telling the unions we do not want another tax-and-spend liberal at the reins of power in Wisconsin. You can do this by contributing $20, $50, $100, or whatever you can afford by clicking here.

I have been a man of my word to the voters of this state and have always led by putting the interests of Wisconsin taxpayers first.

Since taking office, I have eliminated a bureaucratic and bloated budget mess left by the previous administration without raising taxes or laying off state workers. Thousands of Wisconsinites are back on the job, and statewide property taxes have decreased for the first time in years. Stand with me today with a generous contribution of $20, $50, $100, or whatever you can afford.

The people of Wisconsin deserve to see the bold and courageous choices I have made come to fruition. It is time to stop these out-of-state special interests in their tracks and let them know that our conservative values will not be taken lightly.

With your help, I will be the first Governor of Wisconsin elected twice in my first term.

Thank you for your support,