Townhall.com has a lot of writers but no one does a better job consistently than blogger John Hawkins. Here’s how he opens his latest column:

The finest American President of the 20th century was Ronald Reagan, but the greatest world leader during that time was Winston Churchill. Had the Brits not had a man of his caliber at the helm during World War 2, world history may have turned out very differently. Not only was Churchill a great leader, he was one of the single most quotable men who has ever walked God’s green earth. 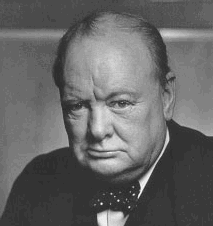 40) “It is no use saying, ‘We are doing our best.’ You have got to succeed in doing what is necessary.”

39) “I may be drunk, Miss, but in the morning I will be sober and you will still be ugly.”

38) “To build may have to be the slow and laborious task of years. To destroy can be the thoughtless act of a single day.”

37) “Success is not final, failure is not fatal: it is the courage to continue that counts.”

35) “In war, resolution; in defeat, defiance; in victory, magnanimity.”

34) “Nothing in life is so exhilarating as to be shot at without result.”

33) “This is no time for ease and comfort. It is time to dare and endure.”

31) “A lie gets halfway around the world before the truth has a chance to get its pants on.”

30) “We contend that for a nation to tax itself into prosperity is like a man standing in a bucket and trying to lift himself up by the handle.”

29) Lady Astor: “Winston, if I were your wife I’d put poison in your coffee.”

Winston Churchill: “Nancy, if I were your husband I’d drink it.”

28) “When the eagles are silent, the parrots begin to jabber.”

27) “If you have an important point to make, don’t try to be subtle or clever. Use a pile driver. Hit the point once. Then come back and hit it again. Then hit it a third time-a tremendous whack.”

26) “Success consists of going from failure to failure without loss of enthusiasm.”

25) “Character may be manifested in the great moments, but it is made in the small ones.”

24) “Men occasionally stumble over the truth, but most of them pick themselves up and hurry off as if nothing has happened.”

23) “If Hitler invaded hell I would make at least a favourable reference to the devil in the House of Commons.”

21) “Socialists think profits are a vice; I consider losses the real vice.”

20) “The Americans will always do the right thing… after they’ve exhausted all the alternatives.”

19) “An appeaser is one who feeds a crocodile—hoping it will eat him last.”

18) “Courage is the first of human qualities because it is the quality that guarantees all the others.”

16) “Some see private enterprise as a predatory target to be shot, others as a cow to be milked, but few are those who see it as a sturdy horse pulling the wagon.”

15) “The Germans have received back again that measure of fire and steel which they have so often meted out to others. Now this is not the end. It is not even the beginning of the end. But it is, perhaps, the end of the beginning.”

14) “You have enemies? Good. That means you’ve stood up for something, sometime in your life.”

13) “Never in the field of human conflict was so much owed by so many to so few.”

11) “If you have ten thousand regulations you destroy all respect for the law.”

10) “What kind of a people do they (Japan) think we are? Is it possible they do not realise that we shall never cease to persevere against them until they have been taught a lesson which they and the world will never forget?”

9) “I would say to the House, as I said to those who have joined this government: I have nothing to offer but blood, toil, tears and sweat.”

8) “It has been said that democracy is the worst form of government except all the others that have been tried.”

6) “You ask, What is our policy? I will say; ‘It is to wage war, by sea, land and air, with all our might and with all the strength that God can give us: to wage war against a monstrous tyranny, never surpassed in the dark lamentable catalogue of human crime. That is our policy.’ You ask, What is our aim? I can answer with one word: Victory—victory at all costs, victory in spite of all terror, victory however long and hard the road may be; for without victory there is no survival.”

2) “Hitler knows that he will have to break us in this island or lose the war. If we can stand up to him, all Europe may be free and life of the world may move forward into broad, sunlit uplands. But if we fall, then the whole world, including the United States, including all that we have known and cared for, will sink into the abyss of a new Dark Age made more sinister, and perhaps more protracted, by the lights of perverted science. Let us therefore brace ourselves to our duties, and so bear ourselves that, if the British Empire and its Commonwealth lasts for a thousand years, men will still say, ‘This was their finest hour!’”