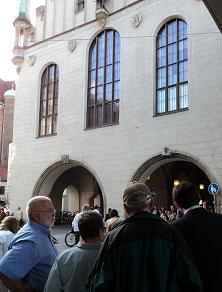 Hitler was in Munich, Germany, inside the room behind these windows when he launched Kristallnacht. (2010 photo by John Biver)

From Bruce Walker at American Thinker:

The civilized West was horrified. Although Nazi contempt for Jews was no secret, the period leading up to Kristallnacht had been fairly tame. Anti-Semitic propaganda had almost vanished in 1936, when the Nazis were trying to impress the world with the 1936 Olympic Games. Germany had long been known as an orderly society — almost a compulsively orderly society. Cold Pogrom, the title of a 1939 book by Max Berges, described the calculated and increasing pressure on a typical German Jewish family which led, eventually, to the death of every family member.

At first, although this seems odd to us today, the Nazis claimed that they were simply trying to drive Jews out of Germany. The threat which the very existence of Jews supposedly posed to National Socialism manifested itself later. Those familiar with the history of the time doubtless recall the “Madagascar Plan,” which involved the removal of Jews from Europe to the big French-held island off the coast of southern Africa.