Too bad more taxpayers don’t know about this scandal involving big bucks. “Public servants” — ha! — getting the better salaries, benefits, and pensions than the people they supposedly work for. And that includes all levels of government — federal, state and local. Here are two articles on the topic:

Want the Big Bucks? Join the Government
An editorial from the Patriot Post Editors

A new analysis shows that the public-private sector wage disparity has not improved. In fact, it’s worsened. Previously, the CBO, based on 2005-2010 data, calculated that public sector employees were compensated at a roughly 16% better rate than commensurate private sector workers. That disparity is now up to 17%, according to 2011-2015 data. 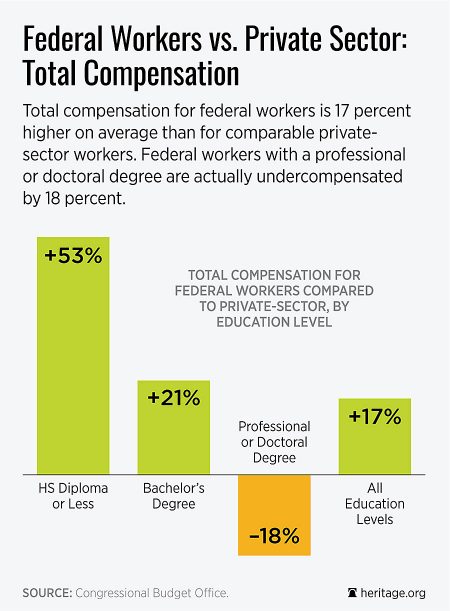 Here’s a Pay Gap Worth Being Concerned About

By Rachel Greszler at The Daily Signal

We’ve heard about the alleged “wage gap” between men and women, but what about the real pay gap between private and public sector employees?

An updated report from the nonpartisan Congressional Budget Office shows there is a growing gap between the compensation earned by federal and private employees with the same qualifications.

After accounting for differences in education, experience, and occupation, the report concluded that the federal government provides its workers with 17 percent more compensation than similar employees earn in the private sector.

That’s up from a reported 16 percent gap five years ago.