Ted Dabrowski and John Klingner have some bad news of Chicagoans and what they’re on the hook for:

Chicagoans are buried under so much pension debt it’s impossible to see how their city can avoid a fiscal collapse without major, structural reforms. The futility of paying down those debts becomes obvious when you try to figure out just who’s going to pay for it all.

The total amount of city, county and state retirement debt Chicagoans are on the hook for is $150 billion, based on Moody’s most recent pension data. Split that evenly across the city’s one million-plus households and you arrive at nearly $145,000 per household.

That’s an outrageous amount, but it would be a clean solution if each and every Chicago household could simply absorb $145,000 in government retirement debt. The problem is, most can’t.

One-fifth of Chicagoans live in poverty and nearly half of all Chicago households make less than $50,000 a year. It wouldn’t just be wrong to try and squeeze those Chicagoans further, but pointless. They don’t have the money. 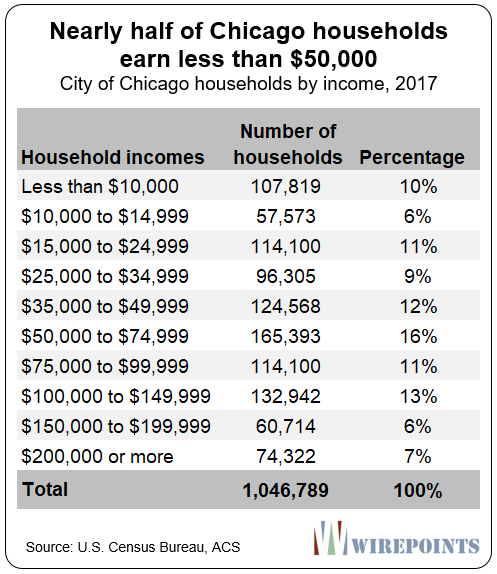 So if that won’t work, why not just put all the burden on Chicago’s “rich?” After all, Illinois lawmakers are pushing progressive tax schemes as the panacea for Illinois’ problems.

If households earning $200,000 or more are the target, they’ll be on the hook for more than $2 million each in government retirement debts. That’s an outrageous burden, too.

Saddling just a few households with all the debt will give those residents all the more reason to leave. And that will make the burden all the more unbearable for the Chicagoans who remain.

The process to target Chicago’s “rich” already started earlier this year. That’s when state lawmakers passed a progressive tax scheme which, if approved by voters in 2020, will hit Illinoisans earning more than $250,000 with tax increases as large as 60 percent. Chicago’s special interest groups want to hit the rich as well. They’re demanding a dedicated city income tax and a financial transaction tax that will impact the city’s wealthier residents.