Here is Jim Hoft at the Gateway Pundit — and note the chart!:

Donald Trump on the other hand continues to outpace Hillary Clinton in rallies and in attendance at campaign events through the first three weeks of August. Trump now has more than doubled the number of events that Clinton has held. Month to date through August 19th Trump has held 24 campaign events to Clinton’s 11. He also has events scheduled Saturday, August 20th through Wednesday, August 24th with Sunday the only day that he is taking off. (Note that this list only includes campaign speaking engagements and not visits with government and corporate leaders which Trump appears to be outpace Clinton as well.)

Due in part to the number of events held, Trump continues to significantly outpace the number of event goers that Clinton has month to date. Trump has accumulated more than 131,000 people at his rallies while Clinton has accumulated only a little more than 10,000. Clinton has given speeches to an estimated 14,500 event goers but one of Clinton’s speeches was to the NABJ/NAHJ which was not a Hillary campaign event. This event had an estimated 4,000 in attendance. When considering only Clinton campaign events Hillary has only 10,500 campaign goers in attendance month to date. As a result Trump has more than 12 times the number of attendees at his events than Hillary. 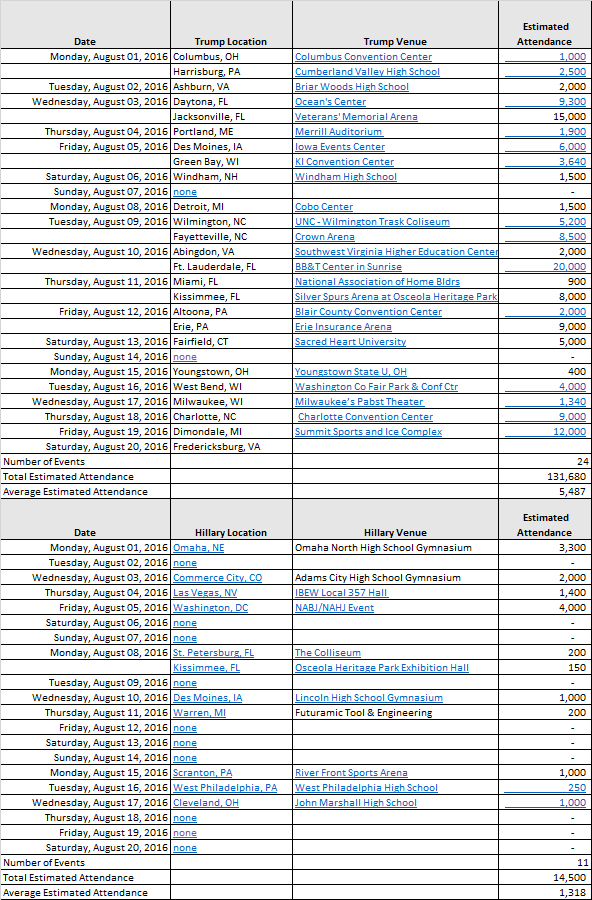