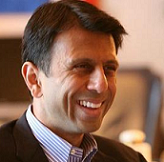 There’s a Republican alternative to Obamacare – a health insurance plan rolled out today by Louisiana Governor Bobby Jindal. It’s not only a better plan, but starts with a better way to think about how we pay for healthcare. […]

You can read the full 21-page plan document here, the 3-page Executive Summary here, Gov. Jindal’s op-ed here, and overviews from Robert Costa and Amy Goldstein at the Washington Post and Benjy Sarlin at MSNBC.

Jindal takes as his starting point that Obamacare would be repealed root and branch, a goal that will be music to the ears of GOP primary voters, but will focus the attention of the many voters who despise Obamacare but want some reassurance that Republicans won’t simply replace it with a desert sowed with salt. The theory of his replacement is as important as its details, many of which would surely have to be negotiated with Congress even if Jindal wins the presidency.

At a conceptual level, Jindal’s plan – like most GOP proposals – diverges from the outset from plans like Obamacare-Romneycare-Hillarycare that promise “universal” coverage and set out to achieve it by (1) forcing people against their will into common insurance pools, (2) forcing insurance companies against their will into insuring all comers, (3) forcing employers to provide health insurance to certain of their employees, (4) in the case of how Obamacare was originally designed, forcing states to follow federal dictates in how and to whom they provide Medicaid, and (5) dictating in minute detail the terms on which all of these compelled interactions are carried out. Even with all of those mandates, even the optimistic CBO projections at the time the Affordable Care Act was passed estimated that the bill would reduce the uninsured population only from 54 million to 23 million by 2019, and those projections have grown less rosy over time, reminding us that universal burdens on the public do not guarantee universal compliance. Rather than chase the chimera of a one-size-fits-everyone plan that will never actually fit everyone, Jindal’s plan revives the premise of our pre-Obamacare healthcare system (where over 80% were insured and about 85% of the insured were happy with their health insurance) and seeks to create the conditions of lower cost and more competition that will entice more people to voluntarily choose a health insurance plan. If this sounds like a familiar concept to you, it’s because that’s how the rest of the American economy works, and always has.