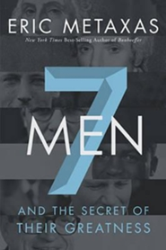 I’ll bet you didn’t know that Jackie Robinson was a devout Christian. (For that matter, I bet you didn’t know Rosa Parks and the Reverend Martin Luther King, Jr. were as well.) Back to Robinson: Eric Metaxas fills in the true story you won’t learn by watching the new movie “42”:

The words are famous even among those who know little about baseball: “I’m looking for a ballplayer with guts enough not to fight back.” They were spoken by Brooklyn Dodgers general manager Branch Rickey to the man whom he’d chosen to break baseball’s color barrier: Jackie Robinson. We see this famous scene in the new film, “42,” a biopic about Robinson. “42”—named for the number Robinson wore on his uniform—is a fine and memorable film starring Chadwick Boseman as Robinson and Harrison Ford as the immortal Branch Rickey. But the film all but omits the most significant factor in Jackie Robinson’s ability to endure almost unbearable insults and physical attacks on the field: namely his strong Christian faith.

Branch Rickey wasn’t the first person to teach Robinson that keeping his temper was more powerful than letting it blow. As I note in my new book, “Seven Men and the Secret of Their Greatness,” while he was a student at Pasadena Junior College, “Jackie met a Methodist preacher named Karl Downs. Downs knew that Jackie was a Christian and taught him that exploding in anger was not the Christian answer to injustice. But he explained that a life truly dedicated to Christ was not submissive; on the contrary, it was heroic…. Downs eventually led Jackie to a deeper faith in Jesus Christ. He began to see that the path to justice would be done not with fists and fury but with love and restraint.”