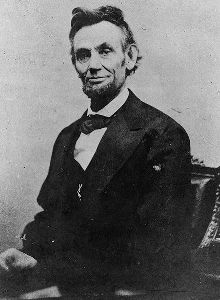 Lincoln at the end

The three men with Illinois connections who made it to the White House were born in 1961, 1911, and 1809 — representing a century and a half of American history.

Barack Obama, according to legend, was born in Hawaii and later moved to the city named after a smelly onion (Chicago). Despite the swooning and slobbering of the news media, it’s still too soon to guess at what the Obama record will be.

These first three weeks of the “Hope and Change” Obama Administration have been one long “we told you so” for those of us who had been warning that he wasn’t ready or fit to serve as president. Now we’re stuck, as Victor Davis Hanson has written, hoping Obama can change.

Ronald Reagan was born here 98 years ago and later moved to California. The legacy of Ronald Reagan is the victory in the Cold War, the defeat of communism, and the revival of the American spirit even as he revived the nation’s economy.

On the subject of interpreting presidents, for anyone interested in a timely comparison of the Reagan and Obama approach to the economy, the Wall Street Journal posted this just yesterday:

Abraham Lincoln was born two hundred years ago today in Kentucky and later moved to Illinois. Lincoln of course is one of the most biographized guys who ever lived. It might come as a surprise to some that Lincoln’s legacy is the subject of serious argument.

In October 2007 I had the pleasure of attending the Heartland Institute’s annual dinner at the Chicago Hilton, where the featured program was a debate about Lincoln’s legacy between Thomas Dilorenzo and Joe Morris. Here’s how Dan Miller of Heartland introduced the debate:

“Like many of you, I presume, I grew up and grew older regarding Abraham Lincoln as one of our greatest presidents. He preserved the Union against the rebels, he freed the slaves, he urged reconciliation during Reconstruction, he was humble and a leader of enormous charisma, and persistent. It was only in recent years, however, that I realized others have challenged those assumptions.”

And challenge they have. Here’s how DiLorenzo opened his remarks:

“I couldn’t resist [Heartland Institute President] Joe Bast’s invitation to come to Chicago and persuade 600 people from Illinois that Abe Lincoln was a tyrant and an enemy of freedom.”

In his remarks, DiLorenzo skewered Lincoln’s actions as president. He said Lincoln was a foe of freedom and a dictator who destroyed the union.

It’s a safe guess that most Americans don’t concur with that summary. DiLorenzo made several good points that his debate opponent couldn’t deny. Morris’ opening line was

“Ladies and gentlemen, Abe Lincoln was not perfect.”

Morris then went on to say:

“Abe Lincoln was a clever, calculating pol. Abe Lincoln was from Illinois — what’s news? I think it is a healthy thing that the world recognizes that no politician is perfect, because it is a mistake, it is dangerous to liberties, to translate political leadership into sainthood. It is a mistake to think that political leaders are the source of salvation on this Earth.”

Too bad it’s too late for some Obama supporters to hear that.

Back to Lincoln. Was the Civil War justified? Was succession legal? What about Lincoln’s tactics? One summary lists Lincoln’s controversial suspension of civil liberties, his having appropriated powers no previous President had wielded, spent money before Congress appropriated it, and imprisoned 18,000 suspected Confederate sympathizers without trial.

The heart of the disagreement between the two, Joe Morris said, had to do with something Lincoln said in his Gettysburg Address: our forefathers brought forth “a nation.”

When Lincoln spoke of “fourscore and seven years ago,” Morris said, the arithmetic took us back to the Declaration of Independence in 1776, not the Constitutional Convention held in 1787. This 13-year gap matters, Morris said, because “a nation and its government are not the same thing.”

“The nation precedes the government. The government is the creature and the servant and the subordinate of the nation. The nation, the people of a nation, can bring a government into being and they can change it — and they did.”

“Lincoln said ‘a nation was founded,’ but the founders did not create a nation. They created a confederacy, a union of states, but it wasn’t a nation and there wasn’t a national government.”

Morris reminded the audience about the opening line from the Declaration of Independence:

“They identified themselves as one people, a people — not a government, but a people. And then they proceeded to spend the next 13 years experimenting with the kind of governmental institutions that they thought would be most conducive to their happiness and to their liberty.”

Of course Lincoln’s reference to 1776 doesn’t stand alone. The U.S. Constitution begins “We the people, in order to form a more perfect union…” Again, “we the people” formed the government.

I highly recommend that you read the full transcript of the debate posted on the Heartland Institute website — you can find it here:

The debate will go on about all of our presidents. In the meantime, Happy Birthday Mr. Lincoln!