As we mark the one-hundredth anniversary of “The Great War,” I’ve been accumulating links to articles that can serve as a mini classroom for learning about the conflict we now call World War I.

First up, a new film by Peter Jackson:

Second, a website dedicated to the anniversary of the war:

World War I in Photos from The Atlantic

World War I in Photos from National Review

Here is an infographic from the History Channel: World War I by the Numbers

Then an interesting post about the cultural impacts of the war: “The Wall Street Journal has selected 100 legacies from World War I that continue to shape our lives today.”

Next up, “A multimedia history of world war one”: FirstWorldWar.com

Next, a review of an interesting new book:

“The Yanks Are Coming!” A Military History of the United States in WWI 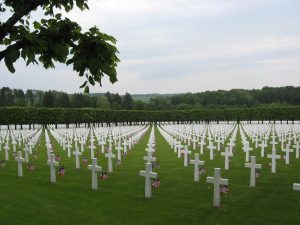 Next, an old book (by Winston Churchill) reviewed with a long excerpt:

Churchill and the ‘Unknown War’
The American diplomat and historian George F. Kennan called the First World War the “seminal catastrophe” of the 20th century. Churchill agreed: “All three [Eastern Front] empires, both sides, victors and vanquished, were ruined … The Houses of Romanov, Hapsburg and Hohenzollern woven over the centuries of renown into the texture of Europe were shattered and extirpated. The structure of three mighty organisms built up by generations of patience and valour and representing the traditional groupings of noble branches of the European family, was changed beyond all semblance.” They were replaced by “a fearsome set of internationalists and logicians [who] built a sub-Ihuman structure upon the ruins of Christian civilization.”

Here are the remaining articles — all worth whatever time you might have to read (and I’ll continue to add articles as I come across them):

America’s deadliest battle: World War I’s Meuse-Argonne Offensive 100 years later
World War I’s Meuse-Argonne Offensive, which involved more than a million American soldiers and claimed the lives of 26,277, was launched in northern France on Sept. 26, 1918 to push the German army out of the country and reclaim a rail network vital to supplying enemy troops. The fight lasted a grueling 46 days and generated scores of stories of heroism and sacrifice.

The Lessons of the Versailles Treaty
The failure of Versailles remains a tragic lesson about the eternal rules of war and human nature itself — 100 years ago this summer.

5 Things You Need To Know About The Battle Of The Somme
The Battle of the Somme was one of the most bitterly contested and costly battles of the First World War, lasting nearly five months. Despite this, it is often the first day of the battle that is most remembered.

The Fading Battlefields of World War I
This year will mark the passing of a full century since the end of World War I—a hundred years since the “War to End All Wars.” In that time, much of the battle-ravaged landscape along the Western Front has been reclaimed by nature or returned to farmland, and the scars of the war are disappearing. Some zones remain toxic a century later, and others are still littered with unexploded ordnance, closed off to the public. But across France and Belgium, significant battlefields and ruins were preserved as monuments, and farm fields that became battlegrounds ended up as vast cemeteries. In these places, the visible physical damage to the landscape remains as evidence of the phenomenal violence and destruction that took so many lives so long ago.

In the final hours of World War I, a terrible toll
Like hundreds of others along the Western Front, Augustin Trebuchon was killed in combat on the morning of Nov. 11 — after the pre-dawn agreement between the Allies and Germany but before the armistice took effect six hours later.

The Last to Fall – World War One’s Tragic Final Casualties
Thousands of soldiers died on the very last day of the First World War. Here are some of their stories. “Of the war’s more than 22 million casualties, a staggering 11,000 were killed or wounded during that last morning of fighting.”

Voices of the First World War: Passchendaele
It was a curious kind of sucking kind of mud. It ‘drew’ at you, not like a quicksand, but a real monster that sucked at you…

Is All Still Quiet on the Western Front?
A hundred years after the “war to end all wars” ended, a journey to the front lines of World War I reveals the poignant battles and their tragic legacies.

The long lines of death
From autumn 1914 to the spring of 1918, 475 miles of parallel trenches were the scene of countless battles but desperately little progress. David Stevenson reveals the truth and tragedy of the western front.

The Hundred Days, 18 July-11 November 1918
The Hundred Days (18 July-11 November 1918) was the final Allied offensive of the First World War on the Western Front. The stalemate on the Western Front had been broken by the great German offensives of the spring and summer of 1918, which had pushed the Allies back up to forty miles and created a series of huge salients in the Allied line. They had failed to achieve their main objective, which had been to separate the British from the French and capture the channel ports, and had drained much of the strength out of the German army.

Germany Had Every Intention of Starting WW I
It’s a myth that World War I was an accident; it wasn’t an inadvertent war but the result of deliberate German state policy.

10 Events that Led to World War I
World War I was caused by a combination of several factors but above all, it was caused by the tensions between the European powers and crisis of the balance-of-power system that divided Europe into two camps.

5 Reasons for the US Entry into World War I
The United States played a crucial role in the outcome of World War I and the subsequent peace treaty, however, the country tried very hard to stay neutral throughout most of the conflict which it saw as a European affair. By 1917, Woodrow Wilson’s policy and public opinion changed in favor of the US entry into World War I for the following 5 reasons that are described below.

10 Greatest World War I Generals
World War I battles were commanded by many brilliant generals on both sides. Combined, they led some 65 million men, many of which sacrificed their lives for an advancement of a few feet. However, they also led some of the greatest battles of all time. Listed below are 10 greatest World War I generals who played a key role in the outcome of the war which dramatically influenced the later 20th century history.

C. S. Lewis and the Great War
A hundred years ago, Lewis was an atheist in the trenches of a terrible war.

10 WW I Battles That Killed Christianity
World War I is responsible for destroying Christianity as a moral order. Christianity survives today, of course, and even thrives in parts of the world, but it does so in the West as a form of resistance or as a reprieve from the day-to-day grind of life in secular democracies. This was not always the case. What is now known as Europe was once referred to as “Christendom” due to the fact that Europeans by and large operated under a Christian moral order.

Lessons from Germany’s ‘Spring Offensive,’ 100 Years Later
One hundred years ago this month, all hell broke loose in France. On March 21, 1918, the German army on the Western Front unleashed a series of massive attacks on the exhausted British and French armies.

Battle of Verdun, 21 February- 18 December 1916
The Battle of Verdun was the longest and most costly battle of the First World War. It would dominate much of the fighting of 1916, forcing France’s allies to fight battles that might otherwise not have been fought, or to alter the timing of their offensives to provide indirect aid to the French. By the end of the battle the French and Germans between them had lost close to one million men.

World War I: Wasted Lives on Armistice Day
On November 11, 1918, Armistice Day, the American Expeditionary Forces (AEF) on the Western Front in France suffered more than thirty-five hundred casualties, although it had been known unofficially for two days that the fighting would end that day and known with absolute certainty as of 5 o’clock that morning that it would end at 11 a.m.

How did so many soldiers survive the trenches?

Passchendaele At 100
With over 1.5 million soldiers from almost every part of the British Empire having taken part in the battle—which lasted from July 31 to November 6, 1917—it has also been extensively covered in Canada, Australia, New Zealand, and elsewhere.

The Yanks over There — 100 Years Ago
American intervention saved Western Europe in World War I, but the result was a failed armistice.

How World War I Changed America, 100 Years On

How America’s Reasons For Entering World War I Resonate Today
On the centennial of America’s entry into World War I, the reasons we went to war hold an eerie resemblance to issues facing our country today.

World War I marks a bloody anniversary: Why the Battle of the Somme marks a turning point of World War I

When 19,000 British troops died in a single day

The Hinge of the Great War

The Battle of the Somme 100 years on

Battle Without End: The casualties of Verdun

Killing The Dead: Atheists Attack A World War I Memorial
We forget World War I at our own peril. Whether we know it or not, society continues to experience its aftershocks today.

Five Lessons Americans Should Learn from World War One

September 1914: Before the Trenches

Why America Fought: The Lessons of World War I

The First World War’s Relevance to Our Times

The World the Great War Swept Away: In 1914, Europe was Prosperous and What Followed Was Unimaginable

When the ‘Guns of August’ Ignited

The Lessons of World War I

World War I Reparations Weren’t As Unfair As You Think: The Anniversary of World War I’s Beginning is a Good Time to Challenge Conventional Wisdom — Did the Versailles Treaty Actually Cause World War II?

Who Started World War I?

The Great War Revisited: Why it Began, why it Continued, and What All That Means for Today

What You Should Know About The Armenian Genocide

Review of Eugene Rogan’s ‘The Fall of the Ottomans’

WWI’s Western Front: War is Hell, But There are Many Levels of Hell

A New Book on the Armenian Genocide