The hardcover version of Glenn Beck’s new book “Broke” is heavy, fancy, and artfully illustrated with a lot of charts and graphs. It’s packed with a ton of excellent information. It also more than makes the case for what Alan Greenspan said this year:

The United States…is in need of a tectonic shift in fiscal policy. Incremental change will not be adequate.

I’ve never delved into the history of our nation’s experience with debt, but wasn’t at all surprised to learn two things. One, our Founders were very vocal in their opposition to the misuse of government debt. Two, our nation has actually experienced the paying down – and paying off – of past debts. 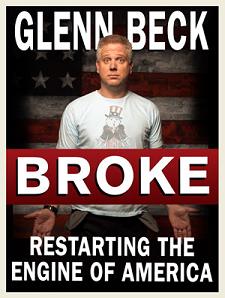 In all the discussion about running yearly deficits over the last few decades, rarely is there a word heard about actually putting our fiscal house in order so we can once again pay down the accumulated monstrosity of immoral government debt.

Once we were “a country devoted to faith, family, and frugality,” Beck writes, but now we’re “a country devoted to freebees.” A lot of governmental spending mistakes were made during the past century because the public misunderstood the best course of action to take. One example Beck gave was back in the 1930s when there existed a perception that the fascist economic policies had “‘worked in Italy and [were] beginning to work in Germany as well.”

As this column harps on repeatedly, nothing moves in politics unless it’s pushed – and the first thing that must be moved is public opinion. When voters are in the dark about the severity of the problem – or are sold a bill of goods as they were during the 2008 presidential election – the obvious result is a worsening of America’s economic situation.

This column also has been honest about the failures of Republicans to improve things when they hold power. Glenn Beck lauds the positives of the Reagan era, but like me, refuses to put on rose colored glasses when it comes to President Ronald Reagan’s failure to limit the growth of government or the growth in the federal debt.

And about those mythical “surpluses” during the Bill Clinton years, Beck kills that one by showing that “Our national debt rose every single year that Clinton was in office…you can’t have both a surplus and a higher national debt.”

Beck is tough on the American people – and I couldn’t agree more:

While fingers can be pointed at any number of people or parties, there’s really only one group that bears ultimate responsibility: us. The American people have been, for the most part, willing to sit idly by as our leaders spent away our future. Sure, we didn’t sign the checks or make the backroom deals, but we didn’t hold people accountable, either.

What has been accomplished, Beck writes, is the pillaging of America. The good news, obviously, is that while much of the theft and fraud has in the past been covered up, “many of us are [now] onto their game.”

I look forward to reading the second half of the book. What I assume is that Beck will only confirm what many of us already know: we can no longer be citizens in name only, and that we desperately need better leaders to step up.

If we don’t do our part, what British scholar C.E.M. Joad wrote will eventually be applied to us. In Beck’s words:

Joad, who studied the collapses of the world’s great empires, said that the declines all had several things in common: decadence, weariness, and irresponsibility…

If any of that sounds familiar, then it’s time to stop taking for granted that America is infallible and enduring and start acting to make it that way.