Friday morning I sent this text message to Pat Brady who sits on the Illinois GOP Platform Committee that proposed removing the marriage plank that defines marriage as the union of one man and one woman:

“Do not replace the marriage plank with the proposed RINO/Libertarian plank that disrespects the view that marriage has an intrinsic nature, [and the view] that children have an intrinsic right to be raised by a mother and a father whenever possible. The language in this pernicious plank necessarily endorses the legal recognition of plural unions. Evidently, RINOs/Libertarians on the committee have no understanding of the essential role marriage has in the health and survival of any society. Mr. Brady, you’ve done enough damage to IL.” 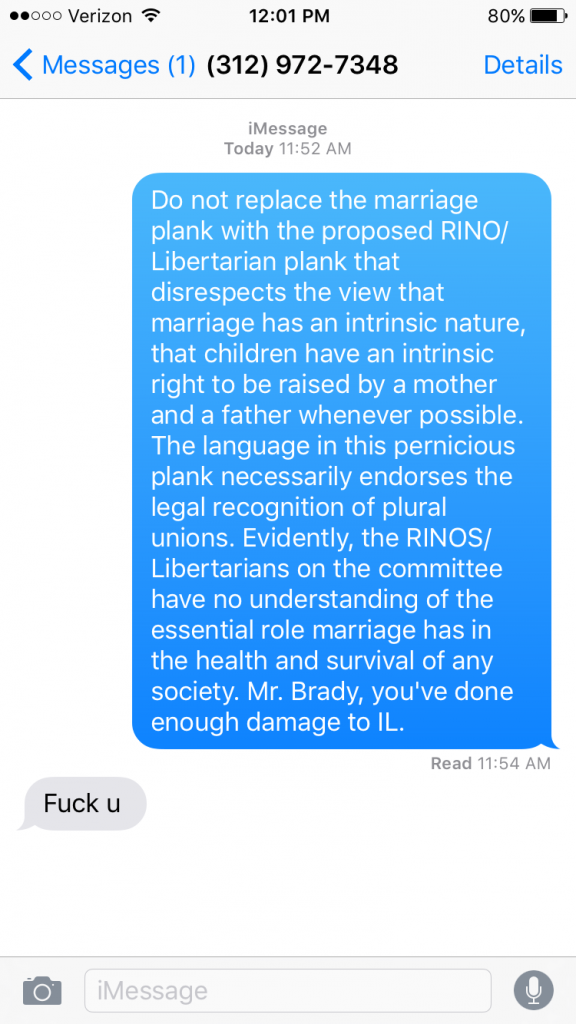 Since I’ve never met Brady or talked to him on the phone, and since he responded two minutes after I sent it, it is highly unlikely he knew who sent the text. Therefore, I can only assume this is how he speaks to constituents who disagree with him.

For those who may have forgotten, Pat Brady is the disgraced former Illinois Republican Party chairman who, before Illinois legalized same-sex “marriages,” skulked around Springfield, secretly trying to convince Republicans to vote in favor of the law that recognizes non-marital unions as marriages. Once ousted from his position as chairman, the ACLU hired him to lobby Republicans to support same-sex faux-marriage.

Brady and his collaborationists are not yet done dismantling marriage and the GOP.

Later this afternoon, a sizable group of conservative activists and various Republican officials will attempt to restore the 2012 marriage language to the newly proposed platform, thereby preserving the integrity of the 2016 Illinois GOP Platform.