Norman Rockwell painted Americana at it’s best — comforting scenes of extended family praying before meals, little boys getting their first haircuts at the neighborhood barber shop, boy scouts listening to a scout leader. Rockwell’s drawings and paintings were for art what The Waltons, Leave It to Beaver and Ozzie and Harriet were for TV.

That slice of America, full of love and family, manners, faith and tradition, is being erased by something sinister, something often unnoticed, invisible.

For we wrestle not against flesh and blood, but against principalities, against powers, against the rulers of the darkness of this world, against spiritual wickedness in high places.

So many Christians in America believe the Bible, and believe the verse from Ephesians, but only in a hypothetical, rather than experiential way. Sure there is good and evil, right and wrong. That’s no modern, politically correct assertion. You won’t find black and white taught in state colleges, excepting as concerns “implicit racism found in every white person whether they know it or not.” But folks untainted by the Progressive delusion still believe in good and evil.

And more and more we can see and even feel the “powers,” the “spiritual wickedness.”

Saturday, February 11 — the date of a nationally held rally for life and to defund Planned Parenthood — marked an occasion for seeing and feeling that wickedness in full force. If “perfect love casts out fear,” then perfect hate must indeed incite fear.

From 9:30AM PT until 11:30AM PT, at 3727 NE Martin Luther King Blvd. in Portland, Oregon, both perfect love and perfect hate were seen and viscerally felt.

I was invited to attend by my dear friend, Cindy Brunk, who would be speaking at the #DefundPP event, and by a frequent organizer of pro-life events, Bill Diss. I have attended and covered many such happenings as a pro-life journalist hoping to add some balance to our Leftist Portland press coverage. 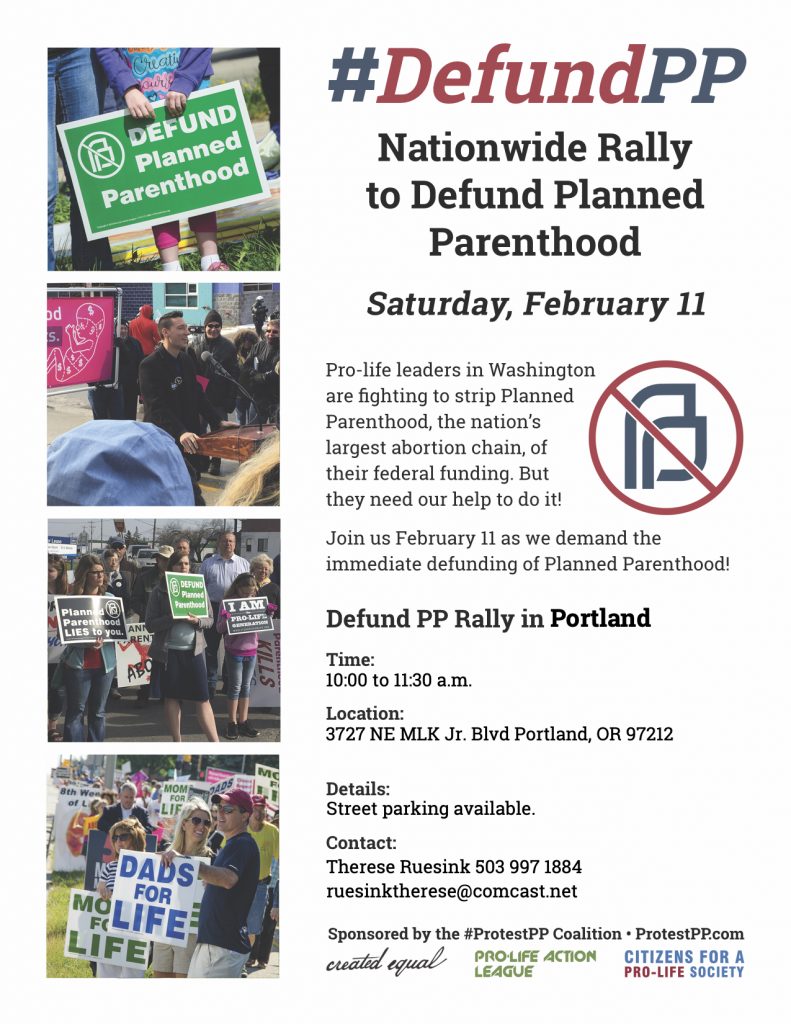 I arrived at 9:30AM to beat the crowd — parking in the area can be iffy and it’s not the sort of neighborhood a woman alone should be walking for more than a very short distance. In fact, NE Portland is one of the poorest, mostly black, communities in the Metro Area. At odds with the lower income surroundings is the multi-million dollar Planned Parenthood structure.

I parked one and a half blocks from the venue, gathered my iPhone and Canon S90, locked my purse and any other items of value in the trunk, and briskly walked east to join my friend curbside, on the west side of MLK Blvd. Cindy and I smiled and hugged, I waved to her husband, John, and heard her whisper, “So far we’re outnumbered.”

I looked up and saw these signs across the street named after the famous, black pastor who believed in nonviolence and the sanctity of life. How ironic.

As I was quickly reading the appalling signage, cars began honking loudly and from behind me a woman began shrieking “Bigots go home!” laced with profanity.

I was a bit stunned by the language and the volume. Cindy asked if I was okay and I nodded, not saying a word, my eyes wide open in disbelief. There were no huge crowds, but the small number of counter protesters were angry. The vitriol was palpable. In that first moment I could physically feel the hate. Pure unbridled hate.

As I attempted to look around, the shrieking female was in my face, screaming in my ear. About this time, John, who’s about 6’2″, moved over to stand in back of Cindy and I (we’re both small, about 5’2 1/2″), fearful that the agitators would push us into the street and traffic.

The shrieker got more creative and began hollering that we were bullies. I was a bully. She screamed, “I bet you were a bully in high school. I bet you were one of those popular girls who got people to kill themselves.” It was incredulous. I wondered if the female was on drugs or possessed or both. It was evil. Wickedness.

I moved into the center meridian to take a picture of Cindy, John, and others.

Notice the blonde shrieker? This picture of her giving me the one-fingered salute was tame. A few seconds later she screamed, “You want to take my picture b*tch? Take a picture of my ass b*tch!” — she turned around, squatted, pulled her pants down and mooned me. I declined to photograph the profane female’s derriere. Keep in mind there were young children nearby.

Also, notice the signs that many of the pro-aborts were holding, which read, “Defend Women’s Rights — Abortion Rights and Reproductive Justice Now! — Portland State University — International Socialist Organization” and written in sharpie, “PortlandSocialists.org.” The symbol on the sign was the Marxist/anarchist raised fist. Like Lucifer shaking his fist at God. Those were professionally-made signs and not cheap. Someone was paying big bucks. In addition, there were many “Black Lives Matter Signs.”

Gradually more pro-lifers began to arrive and we felt a slight lull in the hate-filled abortion-loving crowd. These two cutie-pies were with their dad and brother. “Dad” consented to me snapping a picture; I advised they cover half their face.