State government summer re-run season is underway at the Illinois capitol building where both political parties are cooperating to send our state further into the fiscal abyss.

Midnight came and went as we closed out the month of June without a budget being signed into law, so Illinois has begun its third straight year without one. Governor Bruce Rauner and the leaders of the General Assembly once again have failed in their principle task.

On Friday the Illinois House voted on a budget that includes a permanent massive tax increase — and leaves most of the financial problems unaddressed. State Rep. Jeanne Ives (R-Wheaton) called the house plan “a disaster.” 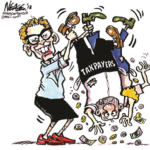 In order to better celebrate Independence Day weekend, Illinois taxpayers may want to avoid reading the details of what our elected officials have once again produced. Perusing just one source, here are a few examples of their “accomplishments” as things stand midday, Saturday:

If that isn’t bad enough, Illinois Review reported that 23 of the 51 Illinois House Republicans joined the Democrats in voting for the budget “disaster.” Thus we should expect that during next year’s campaign, those Republicans will not dare blame the Democrats for the state’s continuing fiscal mess.

In addition to providing more very important information, the Illinois Policy Institute has an online calculator so taxpayers can measure the damage to their family budgets that will come with the bipartisan tax increase. Since the median household income for Illinois is approximately $60,000, here is what it will look like for a family of 4:

What is key, of course, is to keep in mind that this tax increase does not come anywhere near solving the state’s problems. As more people and businesses escape to states where taxes are lower, the burden will only grow for those who remain.

Currently, the state of Illinois takes in approximately $31 to $32 billion a year in tax revenue.  The proposed budget currently before the General Assembly is $36.5 billion, which is why tax and spend lawmakers are again looking to dig deeper into the pockets of hardworking families.

IFI’s Dave Smith points out: “Illinois lawmakers have proven themselves utterly irresponsible with the tax revenues they are getting now, so why would anyone think they would do better with even more taxpayer resources? In fact, between 2011-2014, the lawmakers hit citizens with higher taxes with the promise of righting the ship. Instead of using those funds in an effective and efficient manner, they squandered it.”

That irresponsibility is exhibited in the numbers that continue to get worse: $251 billion pension liability; $15 billion of backlogged bills; $800 million in late fees; and $3.1 billion in Medicaid funding.  You can read more HERE.

More taxes, more spending, more debt and more bleeding of Illinois families.  That’s the message too many state lawmakers are advancing for the citizens of Illinois.

Take ACTION: Click HERE to ask the governor and your state lawmakers to vote against any legislative proposal that would increase tax burdens for Illinois citizens.

Let them know that you oppose any new tax increases when they refuse to cut government waste and bloat. You can also call your lawmakers through the Capitol Switchboard at (217) 782-2000.

State Representative Ives, who voted against the House proposal, summed it up on the house floor yesterday in less than four minutes:

State Senator McConchie Outlines the Simplicity of the Budget Crisis

Please share this information on social media and with your like-minded friends and neighbors.  Only a strong response from Illinois citizens can stop this tax exploitation from going through.

It is only because of concerned citizens like you that we are able to continue promoting pro-family values in the Prairie State.