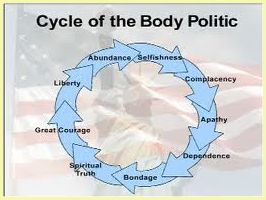 The Second Law of Thermodynamics, which suggests that physical forces are gravitating to entropy, is a perfect metaphor for the moment. European economies are cascading into the netherworld of insolvency even as governments deny the reality. President Obama seemingly defies the rule of law by issuing executive orders that bypass the Congress. Unemployment in the U.S. remains over eight percent for the 42nd straight month. And unemployment in Spain for those under 25 is at 50 percent.

Educational attainment has been plummeting throughout the western world, a form of international dumbing down, despite a widespread belief in self esteem.

An entitlement psychology has brought financial markets to their knees, but few have the political will to tell electorates the truth.

A belief in the Judeo-Christian virtues is waning. Relativism has reared its head as a prevailing philosophical view leaving its admirers subservient to those committed with a belief system.

A Wall Street Journal editorial refers to a leaderless globe. Alas this is true as the U.S. withdraws from its role as the international “balance wheel” and there isn’t an alternative anywhere in the G-20. A world without leaders is a world on the brink of anarchy.