Maybe the better question is – can the Illinois Republican Party learn? Eight full years in the minority, a state fiscal mess getting worse by the day, an activated Tea Party movement now serving as an enormous potential ally – yet still 54 percent of the voters chose someone other than their gubernatorial nominee. 54%!  If it weren’t for two third-party candidates, this would have been a decisive win by Quinn. That’s unacceptable. 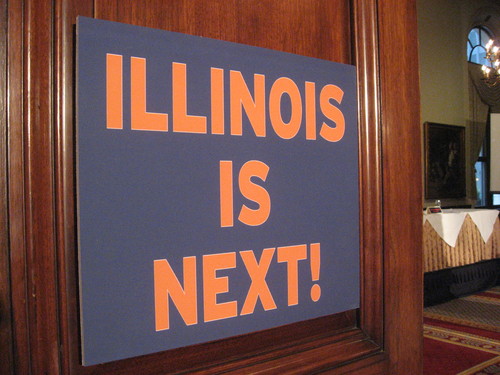 Will this slogan be re-used? (Photo by Lynn Sweet)

Certainly the good news of the day was the Illinois Republican Congressional delegation pick-ups. Some of us saw that happening because those candidates had a message and it reached the voters.

Now we’ll see if those Illinois GOP congressmen disappear to Washington and are never heard from again (as before). My money is on Joe Walsh in the 8th District to be the guy who shows the rest of them what their real job is – which is to move public opinion back here at home.

And Congratulations, Republicans, you’ve elected your own version of Arlen Specter to the United States Senate. You’d better buckle your seat belts because it’s going to be a bumpy ride with Kirk as the top elected official in the state. You don’t yet know how many problems are just over the horizon with the Mark Kirk soap opera.

And when it comes to the issues, despite the empty rhetoric, the guy still supports more of the Democratic Party’s Platform planks than he does the GOP’s.

One more note about Kirk. That end-of October news story about him saying that the Bush Administration lied to him about WMDs was so in character. He had voted against the surge and complained about the Iraq War when it threatened his reelection. That’s pathetic, but those of us not wearing rose colored glasses weren’t surprised by it.

The first words out of Kirk’s mouth today were that he’s going to be an independent voice. Don’t worry, Illinois liberals, Mark won’t be voting in lock-step with those Neanderthal Republicans in Washington. Hey, Mark, we already knew that.

The next big test for many of the rest of the elected Republicans in this state will be this: can they learn from yesterday’s campaign victories won by all of those new conservative Illinois U.S. House candidates? Or will they choose instead to ignore them and pay attention only to the liberal Republicans that won yesterday?

For several years now this column has addressed the political reality that nothing moves unless it is pushed. Republicans at the state legislative level have done nothing to move public opinion to support the right course of action.

And if our elected officials aren’t even attempting to achieve that first and most basic task, is it any surprise that we will begin the ninth year in the minority in the state house and state senate?

There are no liberal solutions to what ails us. Things are so bad that there aren’t even any moderate solutions. The efforts to teach the most basic lessons will have to continue here in Illinois for the Republican Party. The Illinois GOP has flunked again.

This is the third election cycle where I’ve had to write a negative post-mortem. In 2006 I wrote these:

And so we begin

The Illinois GOP’s State of Confusion

In 2008 I wrote these after the general election:

A lot of work will be required to regain lost ground

Political power: Use it or lose it

The good news: “No we can’t” make big government work

There is good news, of course, and that is the rise of the Tea Parties and 9/12 Patriot groups. My message to them is simple. Stick with the fight. If Wisconsin, Michigan and Ohio can throw the bums out (like they did just yesterday), then we can make important state-level gains during the next two years.