The above headline is from an informative short post about Illinois redistricting by Dennis Bryne over at the “Barbershop.” The topic is “gerrymandering,” the now 200-year-old fight over how legislative district lines are drawn.

Every ten years it’s big news here in Illinois — and, of course — around the country. Following each U.S. census, legislative districts are reapportioned and district lines are redrawn.

Whichever party happens to be in power has the chance to create districts that favor their own candidates. Illinois Democrats have drawn the past two maps in Illinois, and for a while, even enjoyed super-majority status in the General Assembly because of it.

Of course, Illinois Republicans hate it.

In Wisconsin, it’s the Republican who enjoy that power, and the Wisconsin Democrats hate it.

A group of those Wisconsin Dems have taken the Wisconsin GOP map creators to court — and now the U.S. Supreme Court is taking the case.

Illinoisans should pay attention to how the U.S. Supreme Court rules on a case challenging how Wisconsin Republicans gerrymandered legislative districts in their favor. While it would be a setback for Wisconsin Republicans it could also be a setback for Illinois House Speaker Mike Madigan and the Democrats who have benefited from his gerrymandering of Illinois House districts.

The Wisconsin case, to be heard in the fall, challenges how the Republican-controlled legislature drew its districts to benefit the GOP.

In Illinois, Madigan’s control for years of the redistricting process has resulted in cockeyed districts that favor Democrats, especially incumbents, a violation in my opinion of the U.S. and Illinois constitutions. The process has made a mockery of those documents’ requirement that legislative districts must be “compact” and “contiguous.” Instead, many districts snake around in contorted shapes that are anything but compact and contiguous.

The U.S. Constitution gives the responsibility of drawing lines to the states: “The Times, Places and Manner of holding Elections for Senators and Representatives, shall be prescribed in each State by the Legislature thereof…”

Here is Article IV Section 3 from the Illinois Consitution:

“Compact” and “contiguous” are not difficult words to understand, so why is Michael Madigan able to “gerrymander” to create a congressional districts that looks like this?: 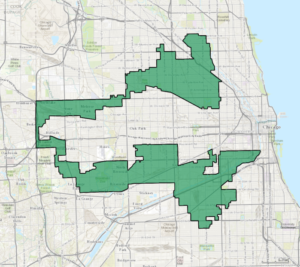 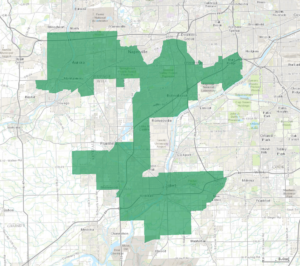 Team Madigan was even more creative when drawing state legislative districts. Zoom in on the map of the Chicago area districts and notice how they snake westward. Illinois Democrats understand this: Why Compact, Contiguous Districts are Bad for Democrats.

Here’s a great analysis from the Decator Herald and Review laying out how the U.S. Supreme Court’s decision could affect Illinois’ redistricting process.

Steve Vladeck, CNN Supreme Court analyst and professor of law at the University of Texas School of Law, told CNN that this case could have “enormous ramifications.””Although a majority of the court has suggested that states can violate the Constitution if they draw legislative districts primarily to benefit one political party, the justices have never been able to identify the specific point at which states cross the constitutional line. In this case, a lower court held that Wisconsin had indeed crossed that line,” he told CNN.

It’s not only “crossing the line,” but evidently the U.S. Supreme Court has failed to be satisfied with the right standard to measure whether a party has gone too far. It’s a safe bet that most people know it when they see it.

Here is how once source summed up the recent history of court decisions:

Gerrymandering to exclude or include people by race has been outlawed, but partisan gerrymandering—redistricting purely to favor a party—is still technically permissible.

That’s because, although the Supreme Court first ruled partisan gerrymandering unconstitutional in 1986 and has reaffirmed the ruling since, it’s rejected every proposed standard for proving gerrymandering took place.

For an excellent image summarizing the redistricting games, click here.

For a good summary of what “gerrymandering” is, check out the first two paragraphs of this article.

Illinois Family Action depends on the support of concerned-citizens like you. Donate now